March 16, 2011
i shared with you that i had been asked to donate a collage or two to a great cause, a ministry for young people at a church in new jersey.  i readily agreed, and when i found out that the theme of the event will be centered around new life, i immediately began to get inspired.  i made this collage, which i shared with you a couple of weeks ago.
but i didn't want to stop there.  i was thinking about new birth, about how my art tries to reflect the redemptive nature i see in God, that God takes what is broken - what is refuse - and makes it new.  as i was reflecting on this, it occured to me that i could take an old collage and breathe new life into it.  when i was first starting as an artist, i made several collages that, looking back on them, i really don't like.  for example, ten years ago i made this collage, which i called "rainboe:" 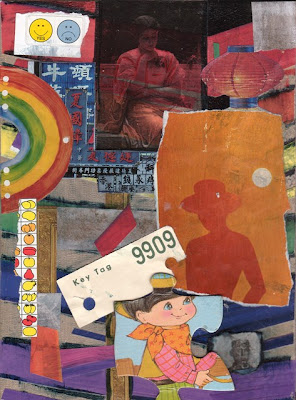 "rainboe"
paper collage on hardcover bookboard
gregory a. milinovich
2/2001
but i really didn't like this collage.  so i thought i would just work on top of it, and recreate it.  i wanted to make it new.  but i didn't want it to entirely lose it's personality, either, so i tried to find a way that the old images would still show through.  i ended up using a technique where i use melted crayon wax.  it is a long process, especially with using so many different shades of wax, but i really enjoyed the way it turned out, and that you can still see elements of the original collage underneath the new one.  it is, quite literally, a new creation. 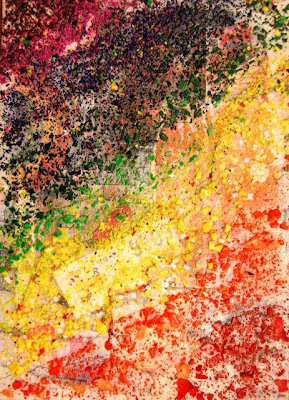 Emoly said…
wow! I love the entire concept, the old piece that you weren't happy with but didn't want to "trash" completely, the new piece and keeping the theme yet making it work into a new theme. I'm still trying to wrap my mind around it all... very complex yet simple.
9:44 AM

Unknown said…
ps. i know how to spell rainbow. it was intentional. fyi.
9:44 AM

Unknown said…
thanks, em. glad you "got" the concept. i was worried i was the only one that it made sense to.
9:45 AM

Anonymous said…
This is incredible Greg! It is the perfect embodiment of God's remodeling force in our lives. How He is capable of taking what we have to start & then resurfacing it into a new creation, if we allow it! Awesome use of the theme!! I cannot wait to see the pieces in person!