December 23, 2010
i know it seems crazy, but it is a steelers thursday today!  so instead of pictures of my kids at their christmas program, you get steelers content.
that's how i roll.
actually, i don't really have to choose between my kids and the steelers.  i have found that the two worlds can be merged.  as you might have seen in this video, i have been working hard to raise two steeler fans.  and it seems, at least so far, to be working.  the steelers are already proving to be a muse for their creative talents, as one day jackson decided to make this out of bendy stix: 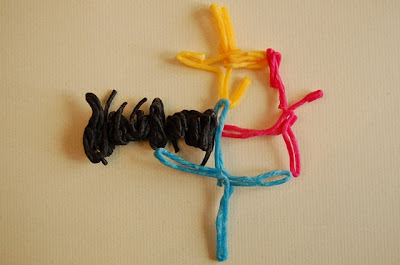 then, one day i came home from work, and caedmon had colored this (with quite a bit of help from his mom, i'm sure): 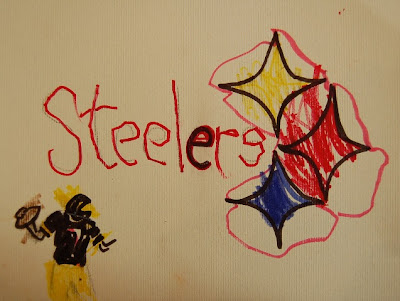 i'm a blessed daddy, that's all i can figure.  needless to say, both of these artistic responses to the greatest sports franchise on earth are now adorning my mancave (which i will be happy to give you a video tour of in a couple of weeks).  keep the steelers art coming, kids.  you may remember that i do the exact same thing.

in other steelers-thursday news, i'd like to share with you that i had the perfect dream last night, both wildly impossible and epically awesome.  the steelers couldn't play in heinz field for some reason, so they decided to play the game indoors in a small venue in waynesburg, pa, which just happens to be where i'm from.  so i went to the game.  there were only about 50 people in attendance, and there was a ton of interaction between the fans and the players.  i was by far the craziest fan there, feeling like i alone had to make up for the lack of fans/noise there.  i distinctly remember jumping around waving two terrible towels and having several steelers players respond.  in between the first and second quarters, the players disappeared to some room, and i went looking for them.  i found james harrison carrying a huge basked full of gatorade bottles, so i asked if he needed any help,.   i took a couple bottles off the top and he laughed and something about how it would be harder for me to carry those two bottles than for him to carry the whole basket.  at one point antwaan randle el threw a football into the crowd. no one caught it and it rolled onto the field.  i leaped out of my seat and onto the field, covering that sucker like it was a live fumble.

so, even without several key players, tonight is a night for the steelers to demonstrate that they are a superior team, and get a good win.

Emoly said…
I have to ask how Shannon slept and if at any time was she being smothered?? (for instance when you leapt onto the field for the loose ball)... Just making sure she's still a Steelers fan too.
9:11 AM

cathyq said…
So funny since the Milinovich Christmas Eve,Eve celebratioon will be in Waynesburg tonight during the game. there must be some connection! We'll still be cheering on the Steelers even if we have to take a few breaks for dinner, pool, and presents! Go Steelers!
2:36 PM

greg milinovich said…
awww...have fun without me, Mom. and know that i wouldn't be fully present even if i was there! hahaha...
2:39 PM