germs are friends, not foes 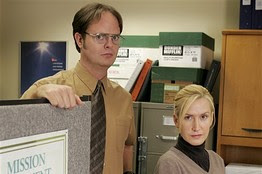 i love television's the office.  for years now, the show has been dramatizing and hyperbolizing real-life awkwardness and making us all laugh uncomfortably at it - and maybe ourselves - in the process.  dwight schrute, one of the most ridiculous characters on the show, has always been over the top with his extremism, whether it be in beet farming or volunteering at the scranton police force.  last night's episode was no exception.
the show opened with a discussion about office hygeine, and one character suggested that she would set up hand sanitization stations around the office. 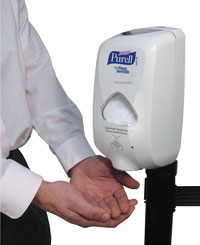 this suggestion was greeted mostly with enthusiastic nods of agreement from coworkers.  but not dwight.  true to form, dwight took the opposing view, and took it (hilariously) to the extreme.  saying that he believes we need to stop coddling our immune systems, he opposed the idea of hand sanitization stations.  he said we need to toughen up and give our bodies a chance to fight the germs and sicknesses.  picking up on the weaknesses of his argument, other characters began to back dwight into a corner, suggesting that they sneeze on him so that his immune system would be particularly strong.  unwilling (as ever) to back down, dwight halfheartedly agrees that this is a good plan.  the next montage shows several characters sneezing on him, and even one character sneezing directly on the english muffin he's about to put into his mouth.  still unwilling to admit defeat, he slowly and ruefully takes a bite of that germ-covered muffin.  hysterical.

but, the truth that this little 2-minute segment of situational comedy pokes fun at is that we, as a culture, are really becoming germaphobes.  dwight's extremism represents an overly ambitious response to this, but there is a sense in which he is right, that we are hurting ourselves when we don't give our bodies a chance to naturally fight the millions of germs that are all around us.  when we howard-hughes ourselves into germ-free living, we rob ourselves of some of our own God-given ability to fight those germs.

howie mandel, a comedian and host of tv's deal or no deal is a well-known germaphobe.  he has written in his book "Don't Touch Me" about his fear of his germs and his obsession with anti-bacterial hand sanitizers.  in this interview with greta van susteren, he explains where this eventually led:

MANDEL: And then I took the -- I had a surgical scrub that surgeons use, and I would wash my hands so much so that I killed all the antibodies in my hands.

VAN SUSTEREN: Really?
MANDEL: Germs are actually good. That kills enough, but I killed too much, and I ended up getting -- it's not because of this, because of overdoing it with the surgical scrubs and that, I ended up having -- I got viruses. Whatever I touched, I ended up getting warts. And I went to the doctor and said what are these things? And he goes you've got no antibodies.

so, it's not at a dwight schrute level, but here you even have a germaphobe realizing that we need to have exposure to germs.

but where this whole germ repulsion thing drives me the most crazy is when it comes to children.  in my opinion, children were designed to play in dirt and eat bugs and swallow snot and eat without washing their hands.  i used to play with my matchbox cars for hours on the bathroom floor, because of the linoleum in there, and, knowing myself, i'm sure i didn't wash my hands before i ate my peanut butter and jelly sandwich.  is it disgusting at a certain level?  yes.  but is it part of life, and, ultimately good for you?  yep.

and if we keep moving as a culture in the direction that we seem to be heading, we may find out just how much we miss our exposure to germs.  now, it seems, just wiping your children's extremities with antibacterial wipes (which we can then thoughtlessly throw away to go and fill a landfill somewhere away from us) isn't enough anymore.  now you can buy these: 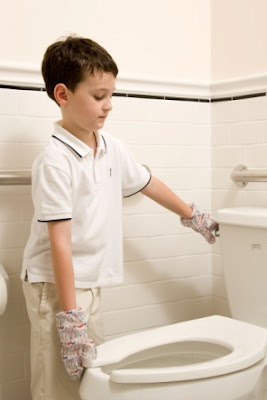 yep.  you can buy gLovies, little gloves for your children's hands for when they use the bathroom or are out in public places.  then, when you're done with them, you just throw them away where they magically disappear (or take years to biodegrade while seeping all sorts of interesting chemicals into the earth).  when i saw this product, i couldn't believe it.

it all makes me want to stand up and yell, in some dwight schrute-ish frenzy, "stop it!  stop it with the fear of germs!  we need germs!  we need each others' dead skin cells and we need all the insect matter in our food and we need all the little germs that are all over the towel dispenser.  we need these little guys because they make us stronger.  look at me!  look at what i've done, and i'm still alive and quite healthy!  stop putting gloves and masks and helmets on your children and stop sheltering them from the world.  let them live!"

okay.  rant over.  carry on with your friday now.  and just remember: germs are our friends. 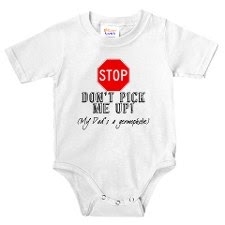