The Broken Path: the stations of the cross - Station 8 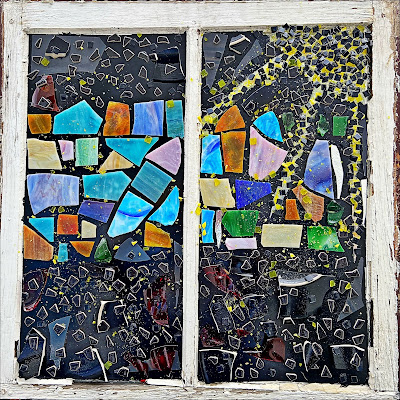 this year during lent, i was inspired to design a set of eight pieces of art for a "stations of the cross" installation, which is currently on display outside on the front lawn at St. Paul's UMC and Wesley Foundation at 230 E. College Ave. in State College, PA.  it will be there on display until april 3rd, 2021.  if you aren't able to see it in person, you can see the whole collection here.  i've also decided to write a bit about each one, so that you can find out a little "behind the scenes" information for each one, and hear a little about my inspiration.  here are the posts for station 1, station 2, station 3, station 4, station 5, station 6, and station 7.

this brings us to the final station, in which we remember that the lifeless body was taken down from the cross, and then brought to a small garden tomb, previously unused.  Joseph of Arimathea, took the body of Jesus, wrapped it in a linen cloth, and laid it in this tomb, which had been hewn from broken rock.  somehow he rolled a large stone (this is hard work!) to cover the door of the tomb, and he left.  but a couple women, including Mary Magdalene, stayed there, sitting by his tomb.  maybe she couldn't let go; couldn't process the finality of this moment.  or maybe, just maybe, she was the only one keeping it together.  maybe she, more than anyone else, could hear the echo of his words when he had told them, over and again, that he would rise again.  maybe she was steady in her faith, even in the midst of her shock and grief, that this would no - could not - be the end.  i can imagine her prayers as she leaned on that heavy stone: "oh God.  oh God, no.  this is not the end.  don't let this be the end.  please, Lord.  everything has fallen apart."

but even from the darkness of the broken earth, buried in rock, there is a sense that in Jesus, all things hold together.  there is a steadiness to his love, that goes deeper than the places where death can penetrate to rob.  this steadiness is referred to in the prayer for this station by Padraig O'Tuama in his prayer book "Daily Prayer with the Corrymeela Community" (copyright 2017, canterbury press, norwich, london).

Jesus of the unexpected,

for at least some of your life

this was not how you imagined its end.

Yet even at the end,

you kept steady in your conviction.

Because, Jesus, keep us steady.

i want to say a word about the art, but first, about this little poem/prayer . i am so captured by those last few lines.  the repeated refrain of keep us steady, and the insertion of that because, as if the one praying has not even the energy to come up with a reason beyond just: hold me together.  we are broken.  we need you.  we need you.  because, we need you.  i feel this plea deep in my gut, like a prayer buried in a dark tomb in me.

for this window, i wanted to stick with my themes, yet do something pretty different.  i still wanted to include those vertical and horizontal elements from all the other pieces, but in a different way, since the literal cross is not present in this story.   i wanted to create a sense of Jesus being buried and cut off.  so, instead of letting light through, as i have in the other windows, i spray painted the glass black, except for a few small cracks that i left unpainted in the upper left corner.  i wanted to leave a small crevice of hope: a fissure of faith that maybe, just maybe, this is not the end? i included several broken elements, including a bunch of broken yellow glass, meant to create the impression that maybe, just maybe, the light can break through the darkness.  like mary, weeping at the cold, dark tomb, maybe we, too, can feel the faintest flicker of light.  maybe we can't even see it yet, but we can cling to our hope for it, even in our shattered, broken messes.  we can cry out, or whimper, or whisper:

Jesus, we need you to come from that tomb.

Jesus, we need you to rise up from the dead.

because, Jesus, we need you...

May 25, 2022
note: i wrote these words back in 2017, after a series of tragedies.  you can see the original post here .  i have adapted these words to deal with the unthinkable gun violence perpetrated against people of color and children in our country in the last couple of weeks.  i share them here as a way to move us, as people of faith, to something more than just words, cynicism, or empty religious platitudes.    It has been a season of terrible tragedy.  And once again I have noticed in the news a trending phrase: thoughts and prayers.  It even has its own hashtag on twitter and other social media, but net necessarily in a good way.  People are understandably tired of hearing about others’ thoughts and prayers, when that is often only a thinly-veiled way of saying that our only obligation to those who suffer is a brief moment of silence, or nothing more than a tweet or public statement.  The truth is that, for those of us who follow Jesus, much is required when our neighbors suffer.  We are
Post a Comment
keep reading

August 29, 2007
we started potty training jack on thursday. we followed a program called POTTY TRAIN IN ONE DAY, which, by the way, i think is kind of crazy. i mean, if someone were to offer you a book called, "ACHIEVE WORLD PEACE IN ONE DAY" i don't think you would take it seriously. and yet here we are, trying to accomplish an equally daunting task in one 24-hour period. it is intense. the day is shrouded in a lie because as soon as your happily diapered child wakes up you tell him that it is a big party. we had balloons and streamers and noisemakers and silly string - all the trappings of a legitimate party. but it is most certainly not a party. it is a hellishly exhausting day. as soon as jack got out of bed, we gave him a present: an anatomically correct doll that wets himself. jack named him quincy. several times quincy successfully peed in the potty and even had an accident or two in his "big boy underwear." he also dropped a deuce that looked and smelled sus
6 comments
keep reading