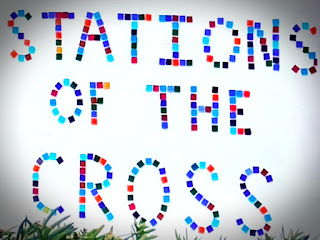 during this season of lent, at the church i serve, we've been talking about brokenness.  we've been looking at the ways that our journey is often a broken journey, full of missteps, sidetracks, and dead ends.  and yet, we have been seeing, as clearly as ever, that those broken places are exactly the same places where grace grows.  the cracks are where the light shines through.

so, as a way to continue to reflect on this brokenness, the worship team thought we might do an art installation outside, on the church property, of the stations of the cross, but in a way that expressed not only the brokenness of Jesus' body and journey to the tomb, but also the brokenness of our world and our hearts.  using something i made several years ago, i thought we might be able to use old windows and broken glass to help tell the story.

so, in the end, i made eight separate stations of the cross, each one on an old window that came from an old farmhouse in bellefonte.  i used broken glass, pottery, mirrors, ceramics, and found sea glass to make them, and to convey the idea of brokenness.  i thought i would take a moment here to share a bit more about each one, the inspiration behind them, and the process of making them.  i will share a separate post for each one through this holy week (although you can see all of them here, if you'd like) beginning here, with the first station.

Station 1 - Jesus is Condemned to Death 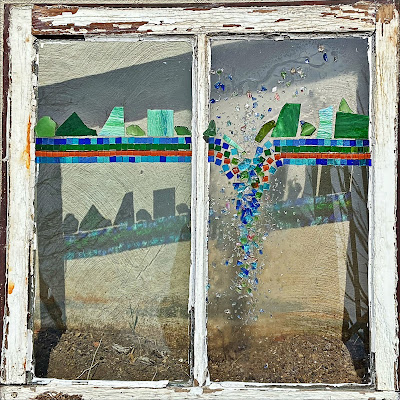 "The Broken Path: Station 1 - Jesus is Condemned to Death"
by Gregory A. Milinovich
broken glass and tiles on old farm window
march, 2021

in this first station, i really wanted to focus on the injustice of Jesus' trial and condemnation.  in the text from Mark 14:53-65, you've got a secret trial under the cover of darkness, charges that are being manufactured as the "trial" progresses, and an accused man who simply lets these desperate men play their silly game, condemning themselves, really, all the while.

when i first designed this one, i had a gavel made out of brown tiles that was meant to be doing the breaking, but thanks to some wise advice, i was able to get a little less literal and just let the brokenness speak for itself.  i wanted to create a real sense of line and stability in this station, so that the brokenness would really stand out.  as you will see, each station will carry this same theme of brokenness, with bits of broken glass.

another theme that is woven throughout each station is the cross.  since each window has a vertical piece of wood right in the middle of the window, i decided to use that as part of a cross.  and to try and create horizontal line also, to create a kind of cross or crucible in each one.  more on the significance of the cross in a later post.

just a note here on the broken glass: it really is broken glass.  every day for several weeks i would take a hammer to bits of colored glass, and shatter it as carefully as possible (but not quite carefully enough, as the dozens of cuts in my hands will testify to).  i then sprayed that section of the window with a waterproof spray adhesive, and then sprinkled the broken glass on that spot, letting pieces splatter wherever they would, trying to create a bit of an explosive appearance.

for each station, one of my inspirations were prayers written by Padraig O'Tuama in "Daily Prayer with the Corrymeela Community" (Copyright 2017 Canterbury Press, Norwich, London).  here is the prayer for the first station:

God of the accused

Who made the mouths, the ears, and the hearts

Of all in conflict.

May we turn ourselves towards that

which must be heard,

because there we will hear your voice.

as i think about the accused and the accusing, as i think about the incredible brokenness of justice in our world today, in which the privileged cling to their privilege and the rich get richer and the poor are crushed under feet and knees until they cannot breath, i, too, feel broken.  i feel overwhelmed.  i feel like all the straight lines of goodness and rightness are exploded into furious chaos.  i feel like the earth is quaking in seismic kind of conflicted hope, in which change moves at a glacial pace, eroding injustice and making straight the broken paths.  i hold to this hope: the hope of justice, the hope of empty tombs, the hope of swords being turned to equipment for growing and making.

but for now, i am sitting in the brokenness.  with the God of the accused, the God who IS accused, and who is broken by our condemnation.