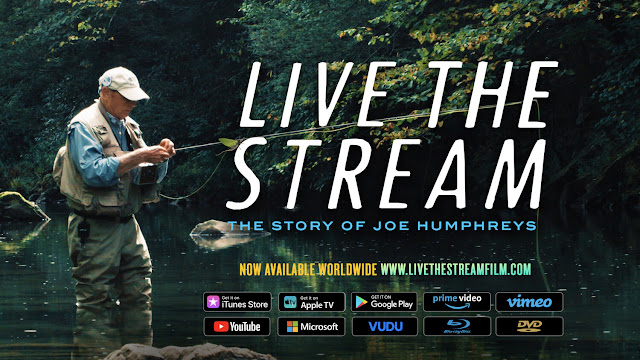 "isn't that wonderful?" he always asks/asserts with a childlike smile, every time i talk to him.  it's as if he's barely even aware that he's asking it, the positivity just oozing out of him, uncontainable, a product of his relentlessly consistent approach to life.

i'm talking about Joe Humphreys, the subject of an excellent 2019 documentary film, and the frequent holder of a seat about 7 or 8 pews back to the right, aisle seat, at St. Paul's United Methodist Church and Wesley Foundation, where i am blessed to serve as the pastor.  when i get a chance to greet him, he'll often ask about my family, or how things are going with me, and when i answer, he'll respond with that characteristic smile, "isn't that wonderful?"  it's impossible not to feel a sense of wonder when you talk to Joe.  for one thing, he's 90 years old/young, but surprisingly spry in body, mind, and heart.  for another thing, he is a bit of a celebrity, but you wouldn't know it from talking to him.

Joe is a fly fisherman.  and not just as a hobby.  he has made a career out of it, yes, but more importantly, he has made a life out of it.  he has taught it, hosted tv shows about it, made videos about it, competed internationally in it, and basically lived and breathed it for the last 84 years.  and in doing so, he has become a legend in the fly fishing world.  in the documentary, there's a scene in which he's fishing alone on a river in arkansas, and a couple fisherman are going by on a boat.  they shout greetings to one another, and then one of them looks at the other, and you can just hear him ask, "is that Joe?" as if you do not even need to use his last name.  recognizable by fly fisherman around the world, just Joe is a celebrity in the fly fishing world, but if you see him in church, he is truly "just Joe."  isn't that wonderful?

what's wonderful is the documentary called "Live the Stream" which tells the story of his life.  in full disclosure, this is not a film i would have probably have watched if it wasn't for Joe himself. while i love the outdoors, i've never been much of an outdoorsman, and certainly not someone who is interested in hooking fish.  but if i had used that as an excuse not to watch this film, i would have missed out on something spectacular.  for one thing, the photography of the mountains streams of central pennsylvania is exquisite, the story telling is excellent, and the man himself - just Joe - is absolutely inspiring.  he "pumps steel" every day.  he wrestles the Penn State University wrestling coach.  he competes in fly fishing competitions around the globe.  he sets records.  he goes fishing in the wee hours of the night, in the dark and the cold.  he teaches city kids and fly-fishing teams.  he opens his dining room table to a wide circle of friends. he catches a trout and holds it in his hand, gently, like a little boy, full of wonder at the wet colors shining in the sunlight.  his smile shines, too, as he asks out loud, to no one in particular, "isn't that wonderful?"

what's wonderful is the way this film, and the life it portrays, made me better.  as i watched him relentlessly pursue the "20 pound brown" and tie little flies with careful precision, and speak with wonder at the wild beauty of an insect larvae covered in mud, i saw a reflection of who i want to be.  Joe is a man with a vocation, not a career.  his is a calling to fish, to point to the wonder of this beautiful creation, to do what he can to help preserve it for others, and to ooze positivity through it all.  this calling is everything to him, and it not only defines him and gives him purpose, it inspires everyone around him.  not to be a fly fisherman, although for some, that might be the calling.  but, in a broader sense, just to live your own calling with as much charisma and wonder as Joe.  the film is called "live the stream," and that certainly is what Joe does.  but i want to live my own calling with the same passion and joy and commitment as he.  i want to smile like a schoolboy on a snow day, and, looking at the people around me, say, "isn't that wonderful?"

thank you for the inspiration, Joe.  keep living the stream to the fullest. 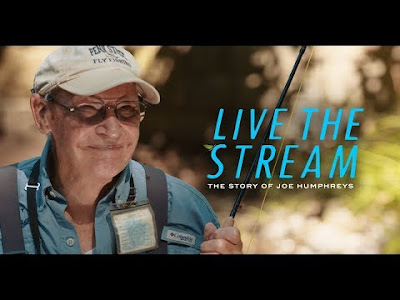 note: i strongly encourage you to see the film.  you can get more info at the website here.