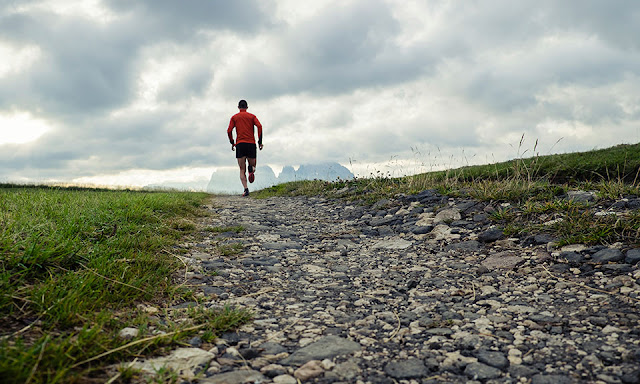 back in early june, as part of an overall effort to get more healthy, i started jogging.  i was just kind of walking and running a couple of miles to start off, but over the last 4 months i've been staying consistent, which has helped me to run faster and further, lose some weight, and just generally be healthier.  on fridays, which are my day off, i try to run a longer distance, and i've been adding a mile every other week or so, which meant that today i ran 9 miles in about 99 minutes, which isn't great, but it isn't terrible, either.  mostly, it just feels good to be doing it, and to feel healthier in a general sense, physically, spiritually, emotionally, and so on.

but there is one area that i haven't felt great about.  professionally, these last 8 months have been, without doubt, some of the most difficult in my 21+ years of full-time ministry.  now don't get me wrong: i love my job.  i really do.  it is so much more than just a job for me, but a vocation - a calling - which has always felt like a sweet spot for me.  if you were to talk to me at age 20, i would have told you with an overly serious but absolutely convinced tone that God was calling me to ministry in a church.  now, 23 years later, i say the same thing, with the same lack of reservations or doubts.  sure, there are moments and aspects of parish ministry that can be pretty tough, but all in all, it seems like what i was designed for.  i love it.

yet these last 8 months have brought new challenges and questions to my vocational journey like i've never had to deal with before.  denominational decisions have fractured the united methodist denomination around the world, and these external forces have had a strong impact on life in my church, and on the way i teach, preach, connect with people, and function as a leader.  i will spare you the details, as much of that is better saved for another post, but suffice to say that the church has become as polarized as the culture around us, and it has become a new and formidable challenge to figure out how to be pastor to all the people, when they don't agree with me or the denomination or one another, and when differences, which used to just be something we acknowledged, now serve as deal-breakers, insurmountable wedges between people, or reasons to leave the family altogether.

in many ways, this season has felt like a kind of wilderness.  like the Israelites of old, it sometimes feels like we are wandering, a bit lost, and a bit unsure where we are headed.  and just like them, there are moments when some of us really long for the past ("the way it was back in Egypt,"), there are many of us, however, who are dreaming about a promised land; about a promise of a time when our differences aren't reasons to leave, but opportunities for growth, for conversation, for mutual respect, and for God to fill the mysterious gaps and spaces in our unknowns.  it is my (perhaps unrealistic) hope that i can be the kind of leader who can lead a church in these terribly uncertain times into such a promise.  but for these last 8 months it feels like i have failed at that, and  like we have just gone in circles (like the Israelites of old - see exodus 13:17-18).

but today, as i was running, i was reminded of something important.  sweaty, and somewhere between mile six and seven, i felt the Spirit's soft nudge.  well, mostly i felt my thighs burning and my lungs aching and my will depleting, because i just wanted to stop running.  i was at a particularly difficult section of the run, a sharp incline that lasts for several hundred yards.  as the ground at the bottom of the hill began to slope upwards, i looked up and could see no end in sight of the rising path before me.  feeling a slump in my own determination, i decided to pull the brim of my hat down, and just focus on the few steps right in front of me.  keeping my head down and focused on my next steps helped me to stop fretting about how long the hill was, and silenced some of those internal voices that were saying things like, "you'll never make it."  all i had to do was take the next step.  it was working!

until i looked up again.  somewhere inside me, a voice said, "how long will this continue?  surely you must be near the end by now!"  so i looked, and i saw that i still had quite a climb in front of me.  and my heart sank.  it was then that i felt the not-so-subtle movement of the Spirit, showing me that this is much like this season in ministry for me.  maybe this moment of the journey feels like a wilderness, or like a really long hill.  the soundtrack to this journey may seem to be a chorus of voices saying things like, "you'll never make it," "we want to go back," "we are leaving," and "you are a failure at this."  but i don't need to listen to those voices.  i don't need to see the end.  i don't need to worry about the crest of the hill, or some so-called promised land.  i simply need to take the steps right in front of me.  we, as a church, need to focus on what we can do, which is to take the next steps, and trust that God is leading us somewhere with a promise, a place of hope, a place of life, even if it means new birth.

the israelites wandered for months, and then, for years, before they lived into that promise.  who knows how long this season will last for us.  but i want to continue to trust in the One who provides the path and the provision along the way.  i want to lean into this wilderness, looking only at the next few steps, and surrendering my need to know how it all ends.  i want to embrace the mystery of it all, and to receive the gifts along the way, rather than missing those gifts because i'm so focused either on where we used to be, or where we might be going.

i am so blessed to be one of the pastors of St. Paul's United Methodist Church and Wesley Foundation, for such a time as this.  i am so honored to get to serve these amazing people, even in these uncertain and challenging times.  and i am so full of joy to keep taking these steps, as the Spirit steps with us, nudging us on with hope.

Darlene methodisttohermadness.com said…
This really spoke to me....not the running part....heaven knows, but the difficulty in the church. I too feel like I've been walking in a wilderness. Moving to South Carolina from New York has been quite a culture shock, and on top of that the denomination and the nation are so polarized. We didn't know one another very long, Gregory, but I have never forgotten you. Thanks for sharing. I appreciate your truth. Peace and love, Darlene
10:12 PM

Cindy A said…
What a wonderful way to view all that is going on. I will try to keep that in my heart. I am so glad God led you to our church in this time.