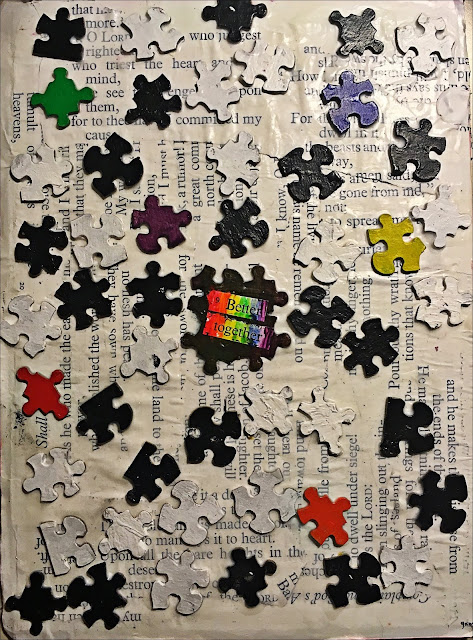 
i finished up my "better together" series a couple of weekends ago with this idea that we really need each other.

honestly, it's that simple for me.  we need each other.

but that doesn't mean i'm always really good at it.  i shared an example in my sermon (which you can listen to here), about my experience this last november going to vote.

i wanted to vote before work, and i had hoped that by going early i could just slip in and out quickly.  but unfortunately there was a long line.  and it was cold.  and on the verge of raining.  and i stood there in line without an umbrella or an overcoat over my suit.  i put on my headphones to listen to something, and pass the time, when (of course) it started to rain, lightly at first.

the man behind me tapped me on the shoulder.  i turned and pulled one headphone away from my ear.  "would you like to share my umbrella?" he asked.  noticing that his umbrella was pretty small, and not feeling particularly ready for that kind of intimacy with this guy i met 2 and a half seconds ago, i thanked him and politely declined.  i turned back around, and put my headphone back in, continuing to wait in a line that just barely moved.  and that's when it started to raid a good bit harder.

without any verbal exchange, i felt the man behind me move closer to me and extend his (smallish) umbrella so that it covered me (at least partly).  i couldn't just not acknowledge this, so i turned to him, and, before i could say anything, he said, "you're going to have to accept it at some point."  and so i pulled both headphones out, and began to have conversation.  we talked about the rain and the slow line and other niceties until the topic of what we "do" came up.  he told me what he does, and then asked about me.  i knew that as soon as i told him i was a pastor, the conversation would shift.  it always does.  sometimes people get sheepish.  or they just shut up completely.  sometimes they feel like they need to make confession for all the perpetual months that they haven't been in church, always telling me just how crazy and busy they have been.  but sometimes, as in this case, it opens the door to a new level of familiarity.  the man with the umbrella's eyes lit up.  he was delighted to find out that i am a pastor, and he proceeded to launch into a lengthy diatribe in which i barely had to speak at all, telling me all about his church and his family and how our country is a disaster and we've lost all our foundation and on and on.  you might think that this was all "right down my alley" so to speak, but it wasn't.  you see, as Umbrella Guy continued on and talked about the candidates that we're going to vote for (obviously we were both going to vote for the same candidates/party, because we are both Christian), i became more and more aware that he was, for me, what Christena Cleveland calls "wrong Christian" in her book "Disunity in Christ."  Wrong Christian is that person who, for you, has the wrong opinions, the wrong ideas, the wrong ways of worshiping, the wrong political agenda, the wrong stickers on the back of their car.  it may be the Christian that wears jean shorts and a hawaiian shirt to worship.  or it may be the guy who wears a three-piece suit to worship every week.  or it may be the woman who speaks in tongues.  or the one who part of the local Democrats club.  maybe it is the married gay couple who worships at the episcopalian church.  i don't know who wrong Christian is for you, but i have to confess to you that Umbrella Man was wrong Christian for me.  i'm not proud of it, but it's true.  but as he continued on about how prayer in schools and stronger abortion laws would fix everything in our country, i was having my own little faith crisis.  here was 'wrong christian' who i was obviously prejudiced against, allowing himself to get partially soaked with rain so that i, the guy in the suit and headphones, could stay at least partially dry.

Umbrella Guy was Jesus to me in the voting line.

and i had to repent of my pride, my prejudice, and my tribalism that causes me to think that if only everybody thought like i did, the world would be a better place.  because it just isn't true.  what makes the world so beautiful and wild and textured and alive is that we are not all the same.  your experiences are different from mine.  and ours are different than Umbrella Guy's.  and if we just hide from each other and never talk to one another, we can just keep pretending that everyone else is wrong.  but if we meet one another...if we begin to make real relationships with one another...we will find that people are people.  all of them, we believe, created in the image of God, covered in the fingerprints of a Creator who not only shaped them and formed them, but called them "very good."  oh, and then loved them so much to die for them.  to experience death for them so that they could experience life.  sounds a little like Umbrella Guy, doesn't it?

Unknown said…
Such a great example of why I love you! So much easier in the preaching than in the living, however! I have a lot to confess this Lenten Season. And I'm worried that this coming weekend will add much more to my confession!! Thanks for a great sermon and a great challenge. Be well as we journey inot this uncertain future!
Galen

Greg Milinovich said…
thanks, friend! i totally agree that the practicing is far more challenging that the preaching!
12:05 PM