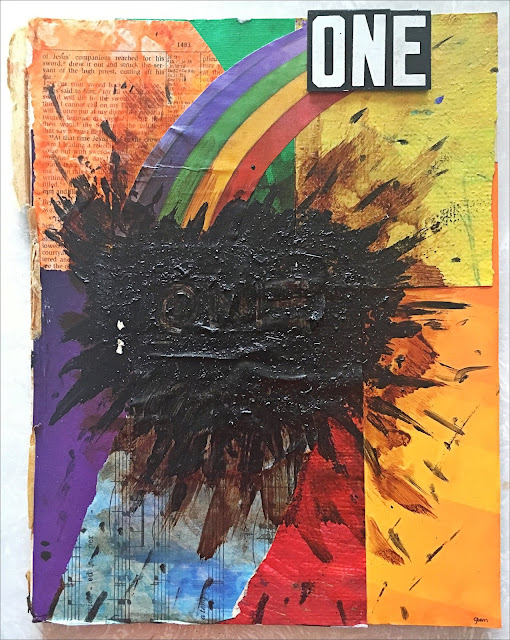 "that they might be one"
mixed media (found papers, ash, shoe polish, acrylic paint, glue) on bookboard
january, 2019
gregory a. milinovich


last week our church began a new sermon series in which we are exploring how, in spite of our increasingly-polarized culture, we are in fact better together.  that's what the series is called: better together.  i am going to be addressing some pretty divisive topics in this series, like politics and race, but we began last week with a prayer which Jesus prayed, that we get to sort of eavesdrop on, as recorded in the gospel of john.  in this prayer, he prays for his followers, both those around him, and those who will one day hear about him through others, and he prays that we might all be one, just as he and his father are one.  he prays for unity.  and he prays for this unity, so that the world may know of his love for us.

i've been thinking a great deal about unity over the last few weeks, in preparation for these messages.  i have to admit that some days unity doesn't even feel possible.  i'm not just talking about our culture or our nation, but even in the church.  as the united methodist church nears an impending vote (once again) about what our tribe is going to say we believe about human sexuality, and as the various sides and sects continue to argue and draw up battle lines, it causes me to wonder how we might possibly be one in the way that the trinity is one.  and i'm not talking about a unity where we all just pretend to agree, or act like everything is fine.  that kind of unity is too often used to cover up injustice and abuse.  i'm not talking about the kind of unity that tells those who are oppressed to be quiet and get with the program.  that can't be the kind of unity Jesus was praying about for his followers.

he prayed that we might be one like he and the father are one.  a deep unity.  a relationship (and web of relationships: community) in which there is justice and peace and love.  as we think about what it means to be the church, to be those who follow Jesus today, how might we live into this?  how can we seek to live in that kind of shalom with one another?

in this new collage i tried to express all of these thoughts and questions.  i wanted to demonstrate the colorful diversity of people.  i wanted to to express the messy chaos of brokenness (i used brown shoe polish and black paint mixed with ashes) and that out of that mess can come something clear and radiant.  i wanted to remember, when i look at this, that Jesus prayed for us.  that we might be one.  so that everyone can know just how much he loves us. 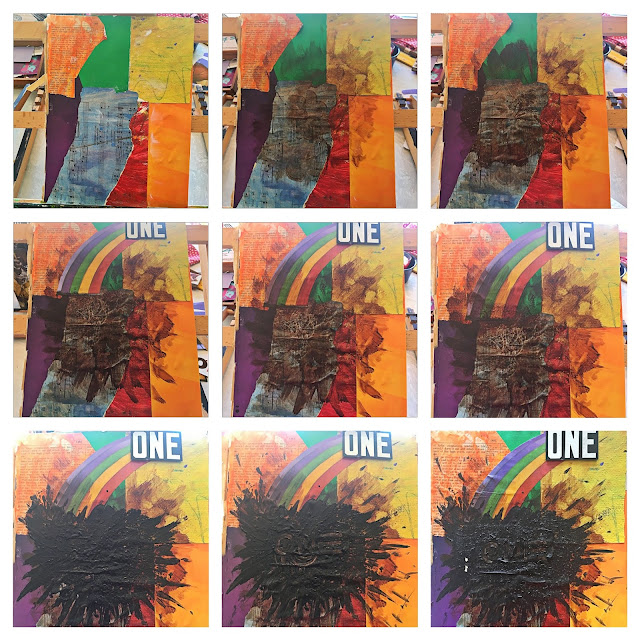