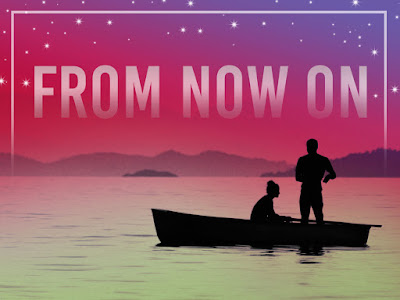 last week i tried to remind myself and any of you reading that Jesus isn't interested in calling only the squeaky-clean or those who have all of their cracks and tears all covered up and hidden.

but somehow many of us still let ourselves "off the hook," by assuming that the people that Jesus is really interested in are the religious people.  people like priests and pastors.  people like walt, the guy who leads two different bible studies at church, always attends the special church events, and reads bible commentaries in his spare time.  we sometimes allow ourselves to buy the lie that says, "those are the real Jesus-followers.  you don't have time for that.  you've got your career and your family and your retirement and your hobbies and your busy schedule to worry about...you can follow Jesus just by going to church sometimes."

but i happen to think that Jesus is actually inviting people - regular people like you and me - to something deeper.

i see it in the story in luke 5, when Jesus is speaking to the crowds from the boat of some local fishermen, simon, james and john.  they've been fishing all night, haven't caught a thing, and are tired, grumpy, and ready to call it a day, as soon as they're done cleaning their nets.  but when Jesus finishes speaking to the crowds, he asks the fisherman to get back in the boats, and head back out to the deep.  remarkably, they oblige, probably because social norms would have made it difficult to resist a rabbi, even one as seemingly crazy as this.  so they shake their heads, grumble a bit, and head back out into the deep water so that they can dirty up their newly cleaned nets, just to show this wacky wise guy that the fish aren't biting.

the nets fill with fish.  so many that they start to stretch and rip.  they can barely haul their catch on board, and it's almost more than the boats can take.  it is all too ridiculous, too unbelievable to do anything but believe that this rabbi is someone they ought to pay attention to.  so they start to grovel and say things like "we're not worthy....we're not worthy."  and Jesus says something really, REALLY cool.  he says, "don't worry about it.  follow me, and from now on you'llI be catching people."

did this rabbi really just ask these stinky, cynical fishermen to follow him?  because, if he did, that's a really big deal.

see, in that culture, following a rabbi wasn't just something that you decided to do one day when you were having a midlife crisis or when you didn't know what else to do.  no, following a rabbi was a lifelong process, which began as early as age 6 or 7.  it began when students starting studying and memorizing the Torah (the first 5 books of the hebrew bible), and then, by the time they were 12-13, the entire scriptures.  memorized.  by this time, most of the would-be followers had fizzled out, and were instead learning the family business, or were apprenticing with someone.  but there was still more.  these young students had to study what all the scholars and rabbis before had thought and written about the sacred scriptures.  they had to be well-versed in various interpretations.  by the time they were in their mid-teens, the very few who were left in this process would be ready to follow a rabbi.  if a rabbi would have them.  see, they had to find a rabbi that they generally agreed with, and then they would sort of apply to follow him (it would have been a man).  the rabbi would interview the young candidate, to see if they knew the torah and the wisdom and the prophets and the midrash and if they knew how to ask questions without obvious answers and so forth.  if the rabbi felt this student was a good fit, and was ready, then they would agree to allow this student to follow them.  this following wasn't just an idea, it was literally the course of action.  the student would follow the rabbi, walking behind them so that it was said that the dust of the rabbi would cover the student.

i share all of this to illustrate that only the very elite students ever make it to the level of following a rabbi.

which brings us back to Jesus and the crusty fishermen.  here is a rabbi, who asks these men to go fishing, and then invites them to follow him.  are you hearing what a big deal this is?  they didn't apply to him!  they didn't seek him out and do their best to hitch their fishing boat to his wagon.  no, he sought them.  he chose them.  he called them.  he invited them to follow him.  they weren't the experts.  they weren't the scholars.  they weren't the guys at bible study, or on the church finance committee.  they weren't trustees or elders or even the type to call each other "brother."  these were more like rabbi-school dropouts.  these were the ones that didn't make the cut.  and they were exactly the ones Jesus called.

and not only that, but he called them now.  "from now on," he said, "things will be different, if you follow me."  this wasn't an invitation to study up.  this wasn't about joining a class.  or taking an elective.  this was an invitation to make an immediate change.  which they did.  they left their fishing equipment right there on the beach (all those fish!), and followed him.

what about me?  could it be that Jesus is also choosing me?  despite my lack of credentials?  despite my busyness and business?  could it be that, even though i've been chasing other dreams and cleaning other nets, Jesus is actually inviting me to leave some of what has been preoccupying me behind, and follow him, even though i haven't memorized anything more than the words to the chorus of the new ed sheeran song?

friends, i believe Jesus continues to choose us.  he continues to invite us to follow him.  and there is no sin or shame that can keep us from answering.  there is no equipment or  inadequacy or lack of knowledge that could keep him away.