why has this happened to me? 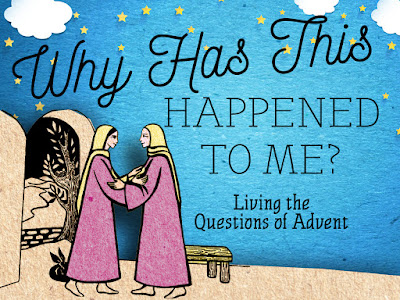 "why has this happened to me?"  that's the question that elizabeth asked, and it's the third question of my advent journey this year.

you may remember that zechariah and elizabeth were living in the hill country of judea; zechariah a priest and elizabeth his wife, unable to bear a child, and they were, as luke is careful to tell us, "getting on in years."  we find that one day in the course of his priestly duties, zechariah's turn to enter the sanctuary and offer incense turns into a moment he would never forget, as an angel of the Lord appeared to him and told him that elizabeth would bear a son, that they would name him john, and that he would prepare the people for the coming of the Lord.  unable to process this increadible unbelievable news, zechariah is made mute until the day of his son's birth.

the story moves ahead to elizabeth's sixth month of pregnancy.  zechariah is still unable to speak.  mary has had her own encounter with an angel, and for reasons we can only guess at, has made the journey from nazareth in the north to elizabeth and zechariah's home in the hill country of judea in the south.  and her arrival there is the context for this third question of advent.

but first, think back over the last six months for elizabeth.  it must have been an interesting half a year; i mean, something significant happened to zechariah in that sanctuary, as he came out silent, unable to speak these last six months.  you might think he could just write her a note, but as a first century woman, the chances of her being able to read it are slim to none.  maybe he gestured to her -a kind of weird game of charades - but she must have wondered what is really going on.  and then as the weeks stretched into months, and she began to experience physical changes, she must have really wondered what was going on.  remember, there were no pregnancy tests from cvs in those days, and remember also that they had wanted to have a child for their whole marriage, and were now past the childbearing age.  you see, elizabeth had no reason to really believe that she was pregnant, so you can imagine the doubts she must have been experiencing, and the questions she was asking.  she had long since given up hope of being a mother, and had dealt with what she called the "disgrace" associated with this for many years.  now, after all this time, she is experiencing the physical, emotional, and spiritual realities of pregnancy, but can she really be sure that this is what she is experiencing?  of course, the one thing that would leave no doubt would be a quickening - the experience of feeling the child move within her.  and she must have felt that, but maybe those first flutterings were unconvincing; perhaps they could be explained away somehow.  after her years of dashed hopes, we could hardly blame her for doubting, or for assuming the worst.

but then something amazing happens.  mary arrives, and calls out to elizabeth, and as elizabeth hear the greeting, luke tells us that the baby in her womb didn't just move, he leaped.  it sound to me like luke is making sure we know that elizabeth could no longer have any doubt; she was sure she was truly having a child!  can you imagine her joy?  after all of this time...all the waiting...after all the disappointment?  could this possibly be true?  she's been struggling to believe it, but now, as the child leaps in her womb, there can be no more doubt, only shock and joy.  oh, and a question, because, after all, advent is a great time for questions.  in all of her joy, elizabeth asks a poignant question, "why has this happened to me?"

it's a question that many of us have asked, i think.  i remember asking it near the end of a football game once, when it felt like the steelers had just blown a game when bettis fumbled that ball at the one yard line.  "why is this happening to me?" i asked out loud to no one in particular, but full of frustration and the sneaking suspicion that somehow i was cursed.  as if the outcome of a football game had anything to do with me.  but that's how it felt to me at the moment. 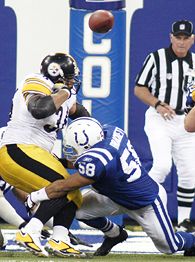 and in my position as a pastor, i have heard many others ask the same question in far more serious circumstances.  at the news of a diagnosis or in the grief of loss or death, i have sat with many folks as they have raged with anger at times, "why has this happened to me!?" or begged for an answer in the midst of their overwhelming grief, "why has this happened to me?"  in those cases, it always feels a bit like a curse that leads to the question.  that we don't have any answers is perhaps a curse enough.  but elizabeth's asking of the questions sheds some beautiful light on our human experience, and the gift of blessing in the midst of so many curses.

elizabeth, as we have mentioned, is full of joy because of her own pregnancy, but that is not all.  in some way, we don’t know how exactly, elizabeth recognizes that mary, too, is pregnant, and not with just any baby, but the baby, the Messiah, the Lord.  think about it, elizabeth is the first person to realize on her own that mary is pregnant and that Christ is about to enter the world.  everyone else who knows has been told by an angel or a dream.  but elizabeth is filled with the Holy Spirit, and speaks out loud what mary had been pondering in her heart, after the angel had given her the news.  mary, who would not yet have experienced much of the journey of pregnancy, finds elizabeth confirming all that the angel had said, with great joy.  and three times in her joyful welcome, elizabeth uses the word “blessed” to describe mary, who is unwed and pregnant, unsure of her future, and worried about what it all means.  yet here is elizabeth, running over with joy, telling mary that she is blessed, blessed, blessed, and why has this happened to me, that the mother of my Lord comes to me?  blessed.

you see, this is really a story about blessing.  elizabeth has been blessed in her old age.  mary has been blessed by God, and now by elizabeth’s confirmation and overwhelming joy.  elizabeth is blessed by mary, the child leaping in her womb, and by something more profound.  the question, “why has this happened to me?” is a reflection of the wonder in elizabeth, and perhaps in you and i, that God would come to us where we are.  when elizabeth needed a confirmation, an answer, a reason to confirm her wildest hopes, that confirmation came in a greeting and a leap.  but in a deeper sense, elizabeth recognized that something greater was happening: that God had come to humanity.  even more unthinkable and unbelievable than a pregnancy late in life, is a God who comes to us in the womb of a young woman, who enters our world and greets us, and causes our spirits to leap for joy within us.

i mean, that is what we are moving towards, right?  over the next couple days, many of us will be in a sanctuary somewhere, and we will hear the sounds of noel and gloria in excelsis Deo, and we will be full of joy and maybe even struck dumb for a moment with the wild wonder of it all: that God would come to us; that God would come to me!  this is the starry-eyed promise of Christmas, that God would be born among us, as one of us – the incarnation – God in the flesh.  that’s the radical claim of Christmas, and when Christians fight for keeping Christ in Christmas, i hope what they really mean is fighting to keep this wild, unbelievable, leap-worthy blessing in our hearts, and not some shoddy substitute, in which we try to convince ourselves that saying “Christmas” instead of “holidays” somehow fulfills our missional duty.  the blessing isn’t simply in uttering the word 'Christmas.'  the blessing is in daring to believe what it means: that this is a thing that has happened to us, to me.  and why has this happened to me?  well, the answer, of course, is love.  not some wishy-washy, touchy-feely, saccharin-sweet substitute; not some radio-friendly, jingle-jangle peppermint latte spirit; but real, gut-wrenching, womb-leaping, life-changing, world-saving love.  will you celebrate Christmas this year?  with traditions and presents and lights and decorations and silent night and joy to the world?  if so, will you also dare to ask the question, “why has this happened to me?  that the God of all creation, would want a relationship with me?  would come to me?”  i pray you find time to ask that question in the busy days ahead, and that you find that your heart is pregnant with the answer, leaping within you: love.  may you know again in these days that you are blessed, and may your knowing this and your celebrating it, be a blessing to another. 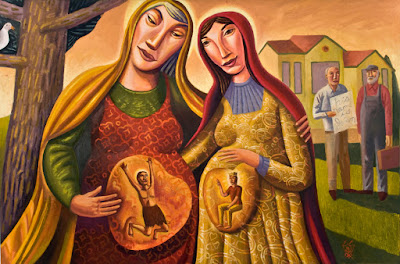