charlottesville, houston, and the sun 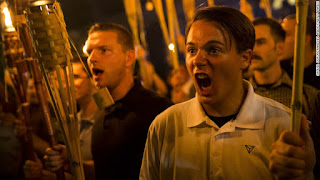 lord, we are divided.  if the images on your tv screen of angry white men carrying tiki torches in charlottesville didn't demonstrate that to you, then the polarized response to it certainly did. not that this should come as a big surprise. after the election, we knew that there was a chasm between blue and red states and their corresponding voters. and while no oversimplified binary expression of extremes can ever fully paint the picture of who we are as individuals or groups, the way the extremes continue to attract movement to the polar caps of opinion shows just how divided we have become.  of course it doesn't help that we hear what we want to hear in news, social media, and even the marketplace (personalized ads online try to only show me what they know think i am already interested in).  further wedging the divide is the increasing inability to have civil discourse with those who believe/feel/live/love/look/vote differently than us.  when these factors converge we have a "perfect storm" of division.

but sometimes in the midst of arguing our positions about healthcare or fake news, something happens that reminds us that we are not as far away from one another as we thought we were. at the very least, they remind us that we are all human beings.  i can't help but think that the flooding in the houston area reminds us of this unifying truth.  the rain falls on republicans and democrats, liberals and conservatives, old and young, male and female, native, white, black, latino, and asian (and everyone else) alike.  no one is right or wrong.  the flood rises without discrimination.  there are certainly ways in which some areas will be less likely to receive rescue or aid, and those systemic failures reveal our own racism and classism, but the weather does not discriminate.  everyone is impacted.  And all of us outside of east texas are unified in feeling for our neighbors.  we wish we could help.  whether we are watching the images of overturned trailers and flooded living rooms on fox news or msnbc or cnn or something else altogether, we all feel something: helplessness, empathy, compassion, or a desire to get involved. 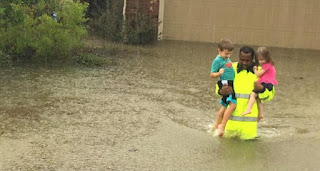 it reminds me of the eclipse last week.  i was at work on monday, armed with a pair of eclipse glasses, staring up at the partly cloudy sky hoping that i could see something.  the experience was remarkable.  here on my corner of planet earth, it looked like pretty much any other monday afternoon in happy valley.  without those magic glasses, i would have had no idea what kind of celestial kaleidoscope was turning in the sky above me.  without those particular lenses, i would have continued on through my monday, doing what was on my agenda, hearing the usual voices and making my routine choices.  but when i put on those glasses, i saw something far bigger than i, bigger than the news and the polls and even bigger than the grief and anger i was feeling since charlottesville.  as i stood there with my glasses, i looked around and saw dozens of students walking by, headed to or from class, or lunch, or whatever, and none of them were aware of what was going on above them.  and i couldn't keep it to myself.  so i started speaking to one particular student as he walked by, "hey, would you want to use my glasses to see the eclipse?"  pretty soon there was a crowd gathering around as everyone wanted  a chance.  and it was my delight, even more than my awe at the eclipse, to watch the response of every person as they put on the glasses: joy, surprise, awe, wonder, excitement, and so much more.  every time someone put on the glasses, i smiled at their experience of what they saw.  one guy's knees nearly gave way as he exclaimed, "no way!  no way!  that is awesome!"  in the half an hour i spent sharing my glasses, they were worn by people of many different races, nationalities, backgrounds, languages, opinions, and political affiliations.  that didn't matter.  this was the sun and the moon which we all share, regardless.  this was our experience, not as those who are divided, but as human beings who are all together on this crazy spinning orb. 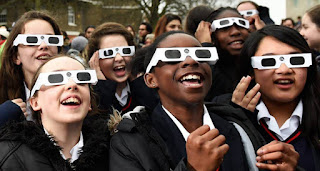 which takes me back to charlottesville. maybe i should try to use those lenses more often.  when i'm reading yet another article on my go-to news source, what would it be like if my opinions were eclipsed by the awareness that those with whom i disagree are human beings, endowed by the same creator with the same rights?  we would do well to acknowledge that all of us are God's children - even those spewing the sinful poison of white supremacy - made in the image of God.  the same rain falls on us all.  we're in this together.  i think we tend to forget that.  so let's occasionally bust out whatever kind of eclipse glasses we can find, anything to remind us that we are all breathing the same air, spinning the same way, and bailing each other out of the floods that rise up.  let us look at the creative One who made us all beautifully unique and different until  we are weak in the knees, saying, "no way!  no way!  this is awesome!"  because it is.  we just get too blind to see it.