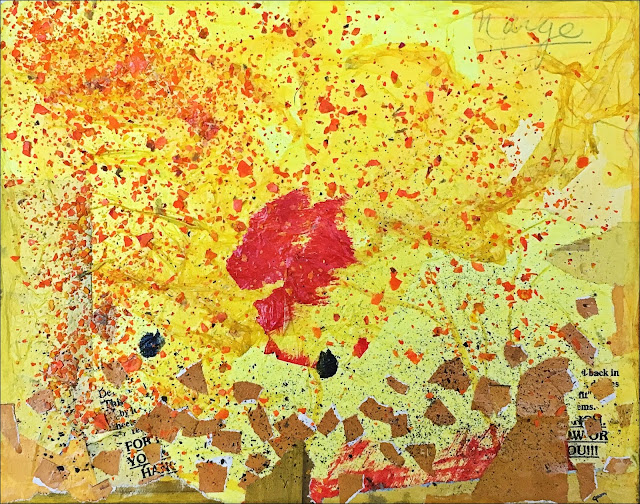 today was the first sunday in lent, and as i have often done, i have decided to practice the lenten discipline of creativity.  for each of our sundays in lent i will be making a collage that emerges from my dealing with and responding to the theme for that sunday in worship.  this year we are focusing on "the landscapes of lent," with any eye to some of the physical elements that mark Jesus' journey to jerusalem, and help to serve as landmarks for us, to guide us and keep us on the right path.

we began to today with wilderness.

fitting, because Jesus began in the wilderness, too (matthew 4:1-11).  he started with prayer, with fasting, and with grounding himself in the truth of who he was and who he was called to be.  in the midst of this visionquest, he was tempted by the deceiver, who tried to convince him to be something other then the one he was meant to be.  he was tempted to be a popular need-meeter (turn the stones to bread), to be a celebrity demi-god (jump off the temple and be saved in front of everyone), and to be a king of kings with unlimited power ("just bow to me.").  but none of these were who he was meant to be.  lord knows that he would have liked to find another way ("Lord, if it is possible, please take this cup from me.....but not my will, but yours be done.).  but the way wasn't one of convenience or pleasure or self-reliance.  it was a way of suffering and humility.  it was the way of serving others.  it was the way of working with a ragtag group of disciples with big mouths and bigger blunders.  it was the way of hanging out in the margins, with the forgotten and the frustrating.  it was the way of angering the elite, disappointing the religious, and never quite fitting in among the bigwigs.  it was the way of calvary and cross.  it was the way of being betrayed.  it was the way of being arrested and unfairly tried and convicted and sentenced to death. this was the way.  the only way.  any other way would have been something less than authentic.

and here we are thinking we are pretty great giving up ice cream or facebook.

it's not about counting calories or reducing our data usage, friends.  it is about cutting out the lies of the deceiver about who we really are, and who we are called to be.  it is about remembering that we are grounded and centered in who God made us to be, and we can find that truth in the word (just as Jesus used the scripture to frame his responses to the tempter...we find our identity in the logos [word] of God - Jesus).

our journey begins in the wilderness.  it is there we find our true selves, and a vision for who we are called to be.  not short cut takers, but servers and sojourners.  bound to be broken, of course.  but made whole by the one who was broken for us.