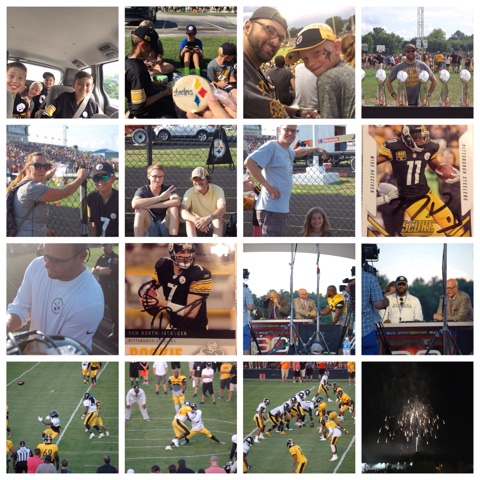 on friday i had the opportunity to lead a group of 10 of us to latrobe for the annual friday night lights steelers practice at latrobe memorial high school stadium, along with 12,000 of our closest friends. we drove out there, did the steelers experience with the kids (including bounce house races, rock wall, face painting, spinning the prize wheel, football toss, and a photo op with the steelers' 6 lombardi trophies, among other things). then we waited in line to get in, so that we could get our position around the autograph fence, and then there was a significant amount of waiting.  but at least the weather was beautiful!  we enjoyed good conversation and laughter along with homemade steelers cookies.  finally the team and coaches arrived on school busses and the autograph session began.  you never know who might come your direction, so we were pretty surprised when ben roethlisberger came near us and started signing.  sure enough, he came our way, and i got his autograph on his rookie card!  I also got markus wheaton's on a card. after that we got a little steelers swag at the merch tent, then walked over to the espn tent where scott van pelt, herm edwards, and merrill hoge were filming a live sportscenter.  we got to see james harrison (what a specimen of a human being), and mike tomlin being interviewed. then we sat down and watched practice, including a spirited backs-on-backers drill which occurred right in front of us. there were some great moments in practice, including a long td pass to antonio brown who then played the crowd into a frenzy. finally practice concluded and they ended the evening with a great fireworks show. we had a fantastic day, and here is photographic evidence of me with big ben directly from the espn broadcast! 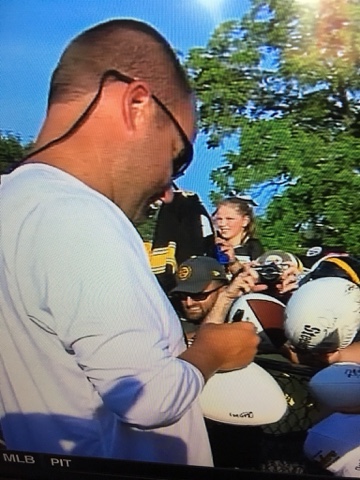