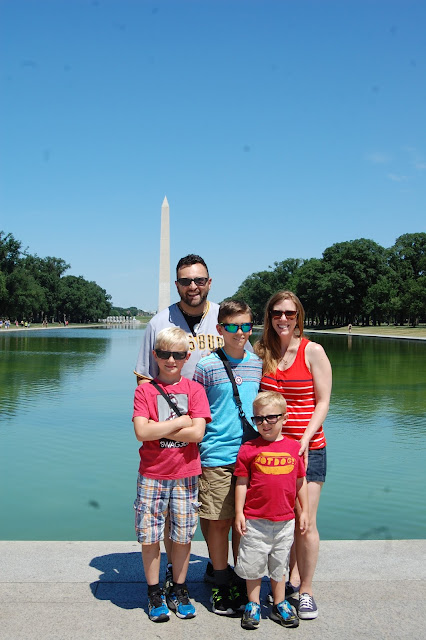 welcome to day 3 of our vacation (for those just joining in....this was last week, i'm only just blogging about it now).  strap on your seat belts because today was a whirlwind of walking and seeing the sites.

we got up and took the metro to arlington national cemetery, where we walked to jfk's tomb, 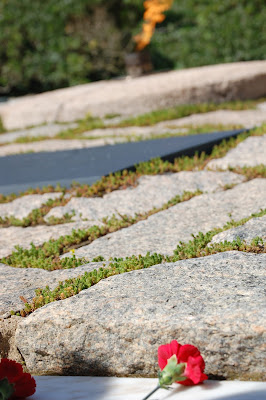 and then the tomb of the unknown soldier where the boys were impressed by the changing of the guard. 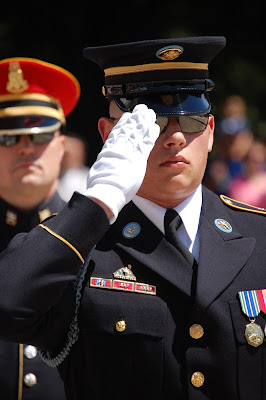 we also got to witness a wreath ceremony, and the playing of taps. 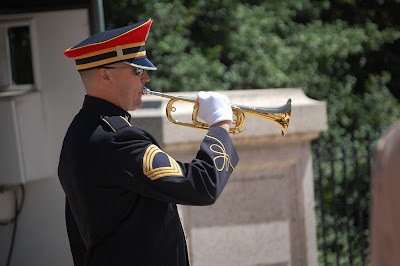 the day was gorgeous, and it was pretty amazing to take in all this color - the bright crayon-blue sky, and the gorgeous green grass punctuated by so many rows of little white stones, so symmetrical, so linear, so stunning. 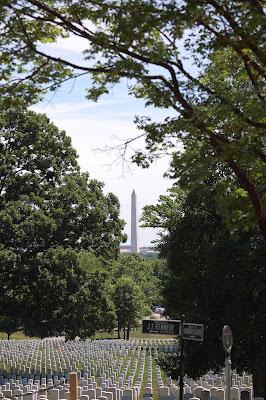 from arlington we walked to the iwo jima memorial, which took our breath away.  we have seen pictures of it several times, but we never expected it to be that big! 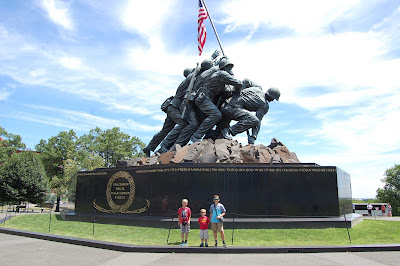 once again, we felt full of awe, just as we did at arlington, at the scope of war, the fury and the frenzy; and the terrible cost.

from there we took a very long walk (two themes of the day: 1. being in awe, and 2. tons of walking), across the bridge over the patomac river into washington d.c.  we arrived on the backside of the lincoln memorial, so we walked around to the front, and up the steps to see him seated as if a king on his throne, a king of freedom, a king taken before his time.  once again we were filled with awe. 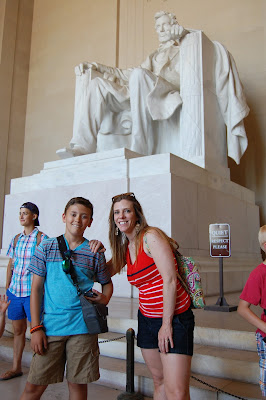 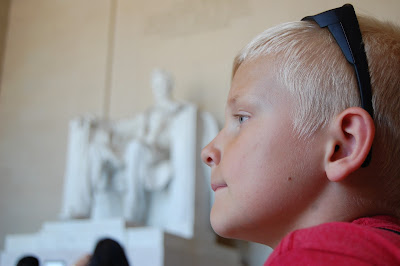 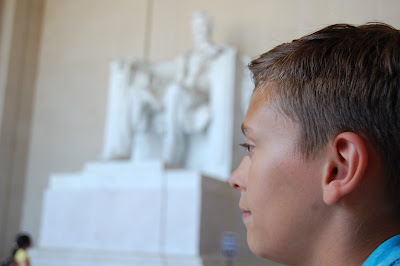 from there we went to the vietnam memorial, that walkway with panel after panel after panel full of tiny little names of people who died in one war.  neither the kids nor shannon or i could wrap our heads around the scope of it: the sheer number of human lives.  it is more than the mind can compute, and far more than the heart can take.  so much life.  so much death.  we were in so much awe. 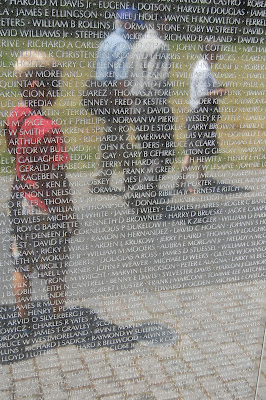 by then it was well after noon, and the kids were complaining about food (come to think of it, when were they not complaining about food?), so we found a hot dog stand on the side of the road, where $25 got us 5 hot dogs.  from there we trekked across the mall to the korean war memorial, which i had never seen before, with its lifelike statutes of soldiers. 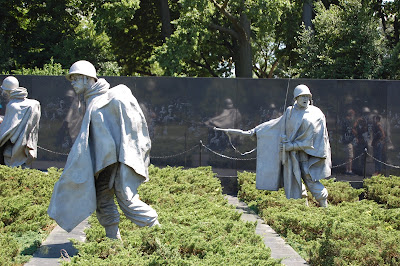 we decided to walk from there down to the new martin luther king jr. memorial, speaking of kings who were taken before their time.  i loved the symbolism of the way it appears that he is stepping forward out of the rock, as if the rock had been cut and he was emerging.  very cool. 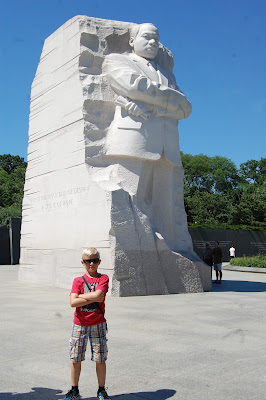 we continued around the water to the fdr memorial, which was quite different and fascinating.  i have never known much about fdr, but the quotes carved in the stone punctuated by waterfalls was enough to make me want to know more about this president.  i was inspired about what it means to be a human who loves other people; what it means to be an american. 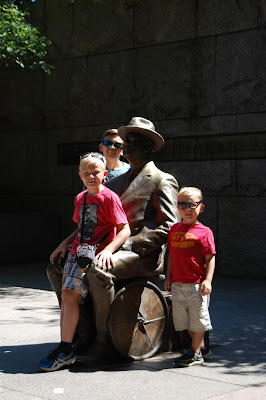 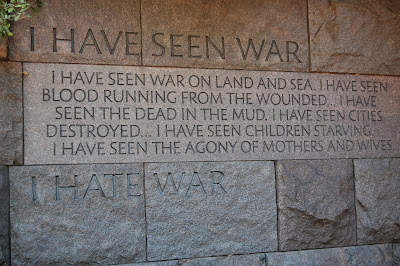 of course we continued around the tidal basin (more walking!) to the jefferson memorial.  even though i had done quite a bit of touring washington when i was a sixteen year old working in silver spring md, i had never been down to see this impressive structure, and i loved it.  there was something regal and even sacred about it.  some of his quotes are carved into the walls around the strong center statute, and one of them caught my eye, particularly in light of a current presidential candidate who would remove certain groups of people based on religious beliefs: "no man shall be compelled to frequent or support any religious worship, place, or ministry....or shall otherwise suffer on account of his religious opinions or belief, but all men should be free to profess, and by argument to maintain, their opinions in matters of religion..."   awesome. 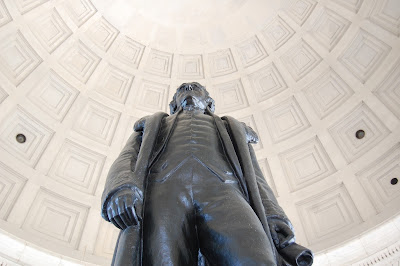 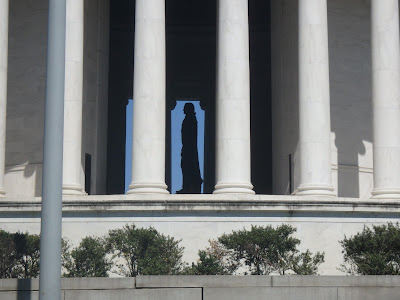 from there we finished walking around the water, back up towards the mall, and over to the metro, which we rode over to union station, where we had a treat and dunkin' donuts and met Shannon's cousin.  we walked from there over to 2nd street where we met Deanne's boyfriend (who works nearby) for dinner at toscana italian restaurant.  dinner was fantastic, and it was nice to sit for awhile. 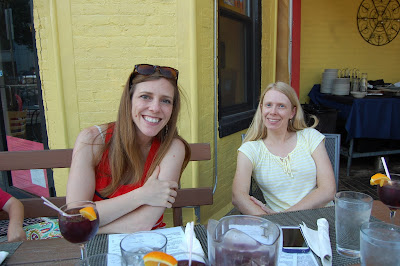 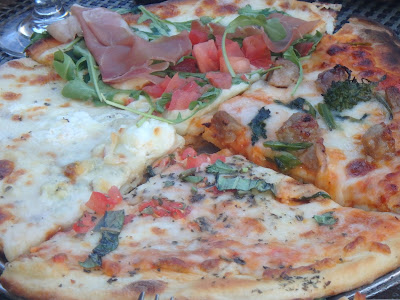 but don't worry, the walking wasn't over yet!  we walked to the steps of the capital for a free outdoor concert by the celtic aire, part of the air force band, and they were really excellent.  it was particularly awesome to sit looking up at the dome of the capital, with its statue of freedom, and the sun setting behind us, while the band sang a stirring version of the national anthem. 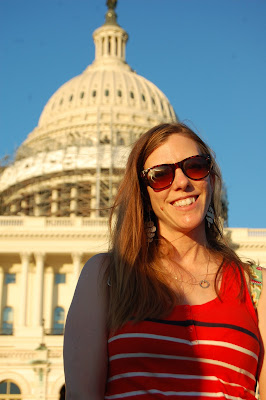 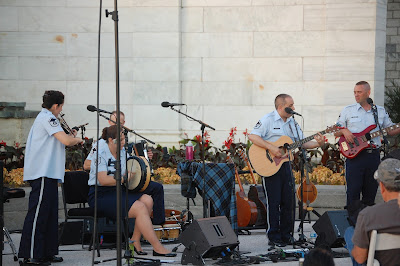 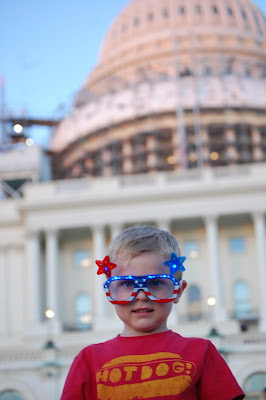 if you want to hear the great sounds of celtic aire, you can click here.


we finally headed back to union station, and the metro ride home.  when it was all said and done, we had walked over 14 miles (well, everyone but quinton, who rode 14 miles).  we were completely wiped out physically, and emotionally exhausted from so much movement in our spirits.  a full and awesome day. 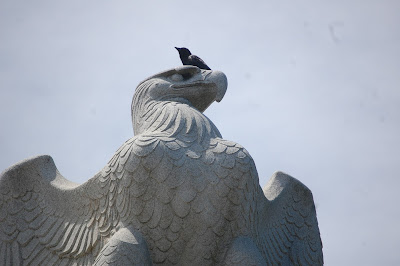 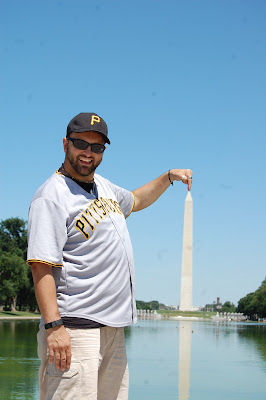 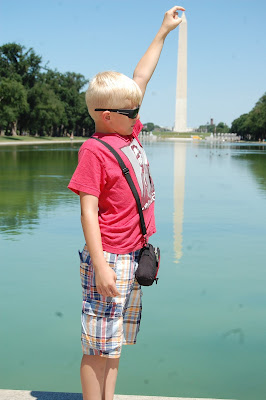 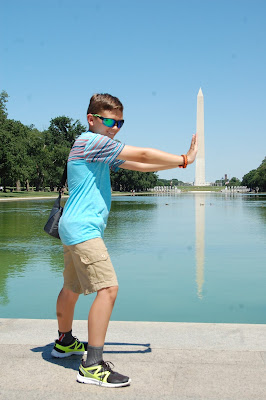