down to the river with Bruce Springsteen 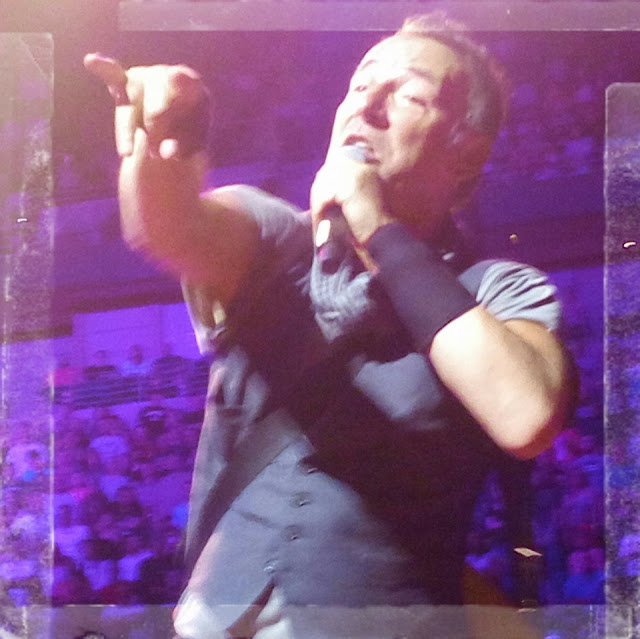 as the lights shined bright in the arena, and we all turned on our backs on the empty stage, to file out into the late night, which would soon be morning, and a new song came over the speakers, softer than the sound that we'd heard for the last three and half hours.  even though Bruce Springsteen had descended into his dressing room beneath or behind the stage, with the E-Street Band alongside, he was still trying to say something.  but this song wasn't even in his voice.  it was the beautifully blended harmonies of Alison Krauss, Gillian Welch and Emmylou Harris, as they solemnly sang, "as i went down to the river to pray....."

Bruce Springsteen and the E-Street Band has been touring the country on what they have called "The River Tour," in which they are playing through the entire 1980 double album, all twenty songs in order.  you've got "the ties that bind," all the way through "wreck on the highway."  in between you feel like you've come to a party ("sherry darling," "cadillac ranch"), a private conversation ("independence day," "drive all night"), and a sidewalk philosopher's manifesto ("the river," "the price you pay"). by the time Bruce and the band have started with "meet me in the city," and then played through the entire album, you are 21 songs into a concert, and thinking that the 66-year old is about to be done.  but you'd be wrong.  he wipes the sweat from his brow, grins at the huge audience, and quips, "we've got some more in us," before launching into the concert favorite "Badlands." 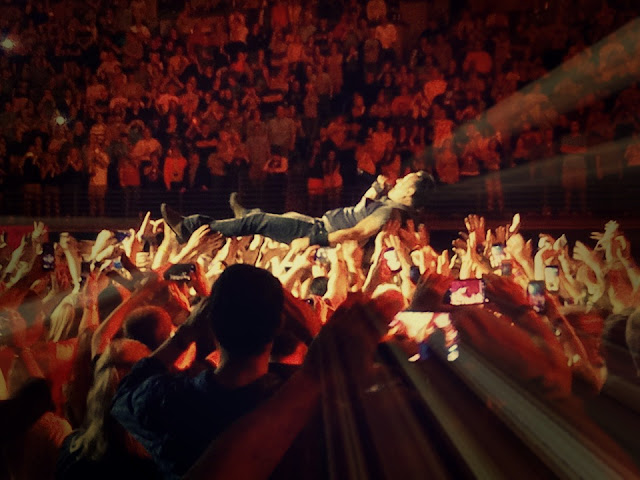 he was spectacular.  he never stopped moving and entertaining, while also clearly trying to tell a story, or bear witness to a greater truth, that he believes so strongly that he is committed to sweating every last drop of fluid in his body in order to share it.  at one point he came over the corner of the stage where we were standing, and sang "thunder road."  there was a young girl, about 12 years old, standing near us, and when he saw her, Bruce reached into his back pocket and pulled out his harmonica.  he gave it to her, and she was obviously moved by this gesture, and his eyes just lit up with joy.  he clearly loves what he is doing.  and he gives it all, even jumping into the crowd and surfing his way some 40-feet to the stage.  in addition to what i've already said, he played, "the promised land," "because the night," "the rising," "jungleland," born in the usa," "born to run," "dancing in the dark," "rosalita," "tenth avenue freeze-out," and "shout."  it was a marathon journey, one baptized in sweat and washed in rhythm, harmony, pounding beats and so much intensity and volume. 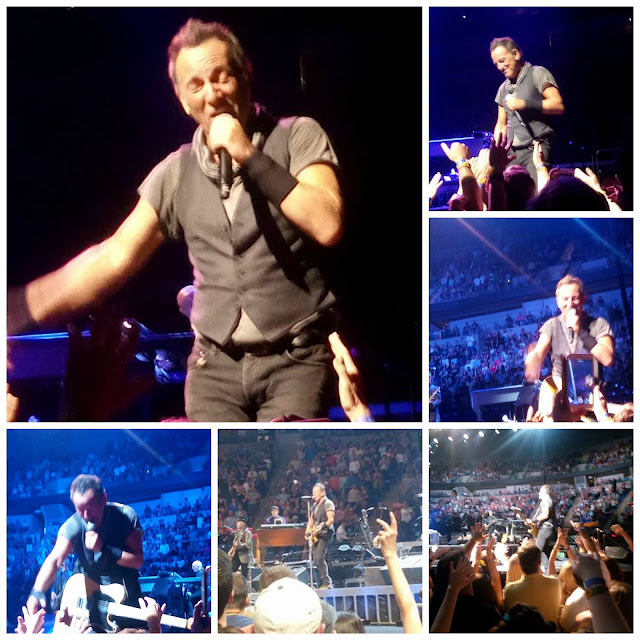 we were so blessed to have been a part of the winning "lottery" group that was privileged to go to the front of the general admission area, called "the pit."  we ended up on the far right corner of the stage, but only 4 or 5 rows back from the front.  he was so close!  at one point i even patted him on the back as he ran by!  all of the pictures you see here were taken by my phone during the concert.  and being that close just helped me feel even more present to the moment, like i was just trying to soak in every possible note and word.  and it was so good.  to see a man living his calling with such passion and conviction, with such energy and commitment, and with such quality and joy, was as much a spiritual experience for me as anything else.  i was moved.  i went down to the river to pray.  and i walked away with a renewed joy.  and i will never forget it.

one other little anecdote that i feel like Bruce would enjoy if he were to know this.  at the concert we stood next to two young penn state students who were crazy about Bruce (not quite as crazy as the guy we talked to who had been to over 120 Springsteen shows...wow!).  we had quite a bit of time to wait before the show started, so we talked a little.   we took their picture.  they took our picture.  we told them we were moving to state college in the summer.  and so forth and so on.  that was last monday.  yesterday - exactly one week later - i had a couple of meetings in state college, and i was early for one so i was walking along college avenue.  i found a record store where i found Springsteen's "The River" on vinyl for a good price.  so i bought it.  as i was walking back to St. Paul's UMC, i passed a restaurant with outdoor seating.  and as i walked by, the girl sitting at the table closest to the sidewalk caught my eye.  something about her looked familiar.  and then as i looked across the table from her, i realized it was the two girls that we stood next to at the concert exactly one week earlier.  now there are some 46,000 students at the main campus of penn state.  FORTY-SIX THOUSAND.  and somehow i bumped into the same two that shannon and i had stood next to last week.  i said hi, we were all amazed at the coincidence (?), and i showed them the record i had just bought.  i have them my card, invited them to church, and walked away with a huge smile on my face, because we had already been a part of a church.  a church for one night that went down to the river, and were changed by it.