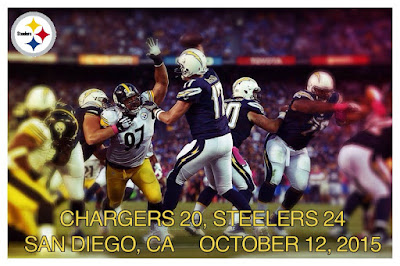 wow! what a monday night in southern california!  the steelers took their backup quarterback show on the road to balmy san diego and it didn't look too promising at the beginning.  the steelers first drive stalled, then the chargers moved down the field with ease and scored a touchdown on 5 or 6 plays.  most of steeler nation must have felt, as i did, that it was going to be a long night.

but where mike vick acted the part of a rusty backup quarterback for most of the game, leveon bell shined with greatness.  he is a true joy to watch.  he takes the ball play after play, runs and passes.  he took snaps in the wildcat.  he handed the ball off.  he made almost super-human cuts to elude tacklers, and when players finally got to him, he often dragged them for 3-5 extra yards.  he is tough and elusive and creative and relentless and fast and just really, really good.

in the end, though, the steelers needed more than just leveon.  they needed vick to do something, and, in the final moments, he did.  he had a big pass to wheaton to tie up the game, and then a beautiful drive in the final 3 minutes to set up the winning score.  on that final drive he threw some good passes, finally went to heath across the middle, and had a key scramble for 25 yards.  all of that set up one of the most dramatic moments in recent steelers history.  the ball was on the 1 yard line with 5 seconds to go.  the steelers could have tried a quick slant or something that would stop the clock with 1 or 2 seconds left, which would leave them time to kick a game-tying field goal.  but mike tomlin, who does not live in his fears (as he says), called a running play which was basically an all-or-nothing proposition.  if the play works, the steelers win.  if it doesn't, the steelers lose.  either way the game is over.  that is a gutsy move to say the least, and one that i don't see many coaches in the nfl trying. 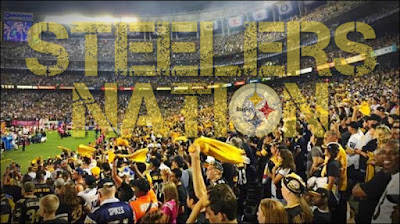 and it worked.  leveon got the ball in the end zone by the (pig)skin of his teeth, and the steelers won.  actually, the officiating crew had to review the video evidence to be sure, and that leads me to my final point.  when the official announced to the southern california crowd that the touchdown stood and time had expired, the place went nuts.  there were terrible towels everywhere.  it was so loud you would have thought they were playing in pittsburgh.  after the game, tomlin began his press conference by acknowledging just how amazing the crowd was, thanking steeler nation for their help.  phillip rivers, the chargers quarterback said after the game that it was difficult for the chargers to hear, and they had to go to a silent count, IN THEIR OWN STADIUM!  wow!  if you want to read a great article about the crowd at qualcomm, check this out. 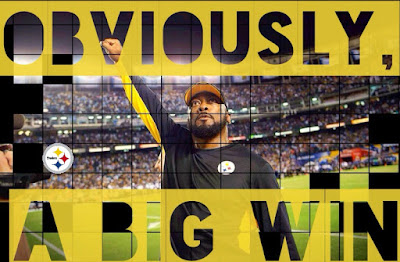 obviously is mike tomlin's favorite word.  just listen to a press conference sometime.  obviously, he says it alot.  but it was never more appropriate than to point out just how big this last-second victory over an afc opponent was, just to keep us in the playoff hunt.  more than that, it may have been the kind of win that really galvanizes the team as they move forward.  let's go steelers!