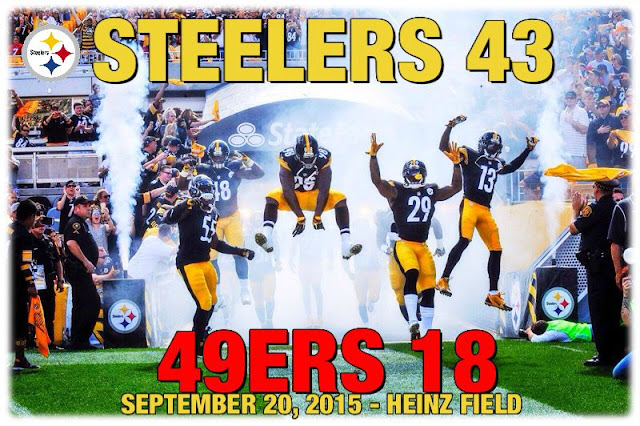 i know it seems a bit late to write about it now, but i am still basking in the glory that was the steelers' complete dominance of the san francisco 49ers on sunday.  after the frustrating reality of losing to the cheatriots in new deflate-land on opening night, it was so fun to see the team come out of the tunnel at heinz field, wearing the black jerseys and ready to find the win column.

well, when i say "see" i really mean "hear."  the game wasn't on tv in my area, so i had to listen to the radio instead.  i would have preferred to see the action in living color, but when ben started flinging the ball all over the field to antonio brown for 195 yards, it didn't really matter.  i just enjoyed listening to every single second. 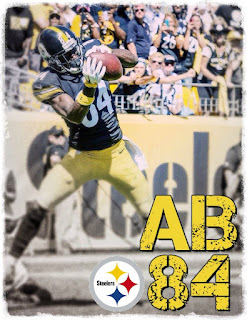 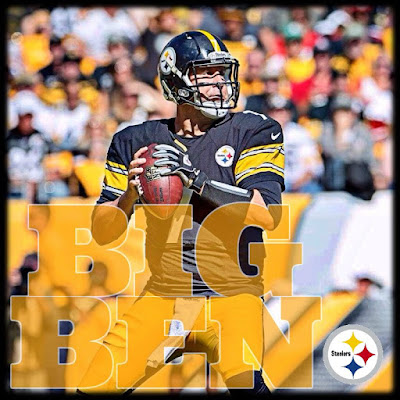 ben was the best player on the field on sunday, in my opinion.  don't get me wrong, i love antonio brown.  he is amazing, and may end up the greatest receiver in pittsburgh steelers history.  and if that ends up being the case, we should appreciate these seasons, because ben is one of the best quarterbacks to ever play.  he truly is.  i'm not saying he's the best ever, but he's right there at the top of the list.  go ahead, argue with me.  call me a homer.  say i'm blind.  whatever.  i don't care what you say.  the guy makes everyone around him better.  remember the great receivers we've had?  santonio holmes.  what happened to him when he went to the jets?  not very good.  how about mike wallace?  he was great with the steelers.  went to the dolphins and what happened?  not very good.  only emmanuel sanders, who went to play with the great peyton manning, has been close to as good as he was with the steelers.  fact is, ben makes good receivers even better.

not only that, but he is a leader and a winner.  he takes all the blame when the team loses.  and he takes none of the credit when they win.  he throws passes that most other quarterbacks never think about throwing.  he has a deep ball that is incredibly impressive.  he scrambles around like a man among boys, shedding linebackers and looking down the field to find long gains.  he has even learned to throw the ball away if necessary, rather than force it and have it intercepted.  yes, the years of experience have wizened him, his off-the-field experiences have matured him, and he is one of the best quarterbacks to ever wear an nfl logo on his shirt.  he was so good this week, that he was named the AFC offensive player of the week.  and with more weapons due to join the team this week and in a few more weeks, watch out. 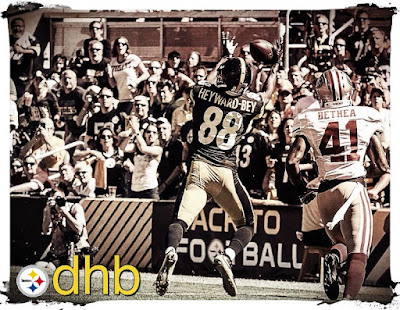 it was great to see darrius heyward-bey make a big play.  good for him.  love to see guys achieve some level of redemption. 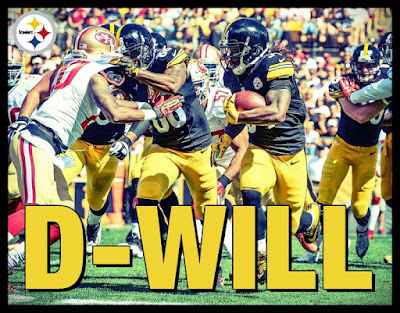 another guy filling in for a suspended steeler was d'angelo williams.  and far from just being a serviceable backup, williams was really, really good for the two games he was filling in for le'veon bell.  he had 3 touchdowns sunday.  three!  and he has said all the right things, including a seemingly authentic mantra about being happy to have bell back this week.  couldn't ask for a better teammate. 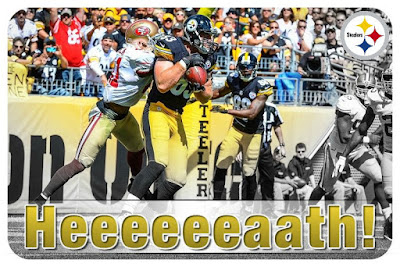 and finally, it was great to see heath catch another touchdown pass.  seems like heath has always been here, and always will be.  i know he won't, and it will be a sad day when there is no heath miller blocking on a screen, or getting open just past the line-to-gain on a third down.  so for now, let us fully appreciate him.

and finally, the much maligned defense was pretty darn good against the 49ers.  they weren't perfect, and there is tons of room for improvement, but they looked far less like the swiss cheese they resembled against the cheatriots the week before.  here's hoping that had more to do with mr. tom brady than the steelers porous defense.  if shazier, dupree, heyward, tuitt and their friends can continue to stop the run and pressure the qb the way they did sunday, we are going to have a very good year.

no matter what, it looks like it's going to be fun.  here we go steelers, here we go!