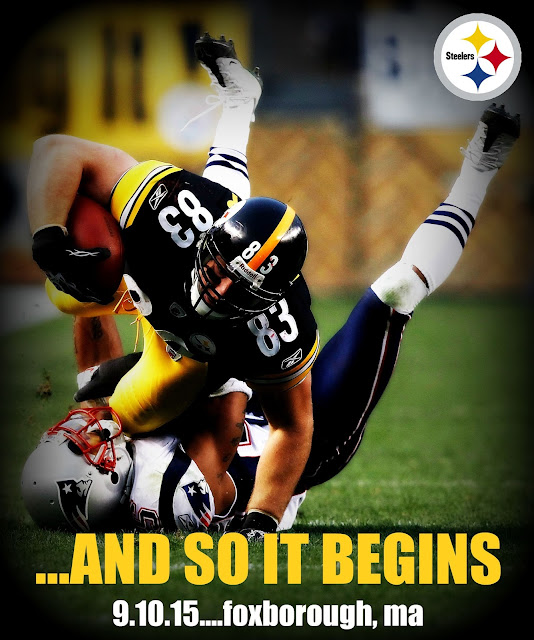 after months of drawn-out legal battling, baffling choices, and incessant babbling about all of it, there will be finally be football.

and once again my emotions are mixed.  i miss the days when i just loved it, for pure reasons.  now, it makes me feel sort of dirty.  like a roman in the stands at the coliseum, i feel like i am witnessing something that is so wretched and wrinkled that i should be shouting "stop!"  and yet, a part of me still very much enjoys it.  no, i don't enjoy concussions and jock culture and the wasting of billions of dollars on a sport that is pretty meaningless when you take a big picture look at life on planet earth, where people are killing each other over resources, and dying for lack of basic needs.  and yet....

and yet, when i see that rich black, mixed with that vibrant yellow, and that starry little logo, my knees get week and i start to think of such noble things as glory and honor and teamwork.  my mind dwells on the thrill of victory, the agony of defeat, and the perpetual value of relentlessly pursuing your vision with passion.  and, underneath all that gobbly-gook, i just think of football.  the beautiful violent game that, i must admit, i love in spite of myself.  so, along with millions of others, i will be watching as the 2015 nfl season kicks off tonight with the pittsburgh steelers traveling to foxborough, massachusetts to face the new england cheatriots, who feel that they are above the rules.  this whole offseason has been dominated by a drama that feels like a bunch of kids playing a board game:  "they cheated!"
"no we didn't!"
"yes, you did!"
"no, we didn't!"

then, the steelers have their own messes to deal with. prominent players, who everyone wishes would behave like role models for the rest of us, are serving suspensions for smoking weed and driving, or for failing multiple drug tests for marijuana.  it all serves to put a couple of huge, ugly black eyes on a game that should just be a game.

still, i'll be watching.  like everyone else, i will watch those beautiful black and yellow uniforms take the field, and my stomach will be all butterflies.  and i can't predict if they'll win 42-38, or if they'll lose 55-13, but either way, i'll be watching with eyes wide open; heartbroken for the brokenness of the people who play it, but in love, still, with the game they play, and the greatest franchise to ever play it.

i'm ready for some football.  here we go steelers!