in defense of the new (old) uniforms 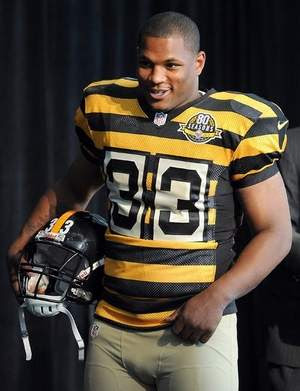 this is old news by now, having come out several weeks ago, and has alraedy been debated to death on the steelers boards, but for my many "casual" steeler fan readers, i thought i'd show you the throwback jerseys the steelers will wear for two home games this year in what is their 80th season as a franchise.

now i understand that you may think they look like bumble bees or colorful jailbirds or even a stryper tribute band who decided to run a marathon, but in this steelers fan's opinion you should just get over it.  here are a few reasons why:

1.  because they are going to wear them whether you like them or not.  twice this year you will tune in to see your beloved steelers play, and they will be wearing these uniforms.  you can either complain for the entire game, or you can cheer on the black and gold.  it's not about the uniform, its about the team.

2.  because it is an honorable tribute to the beginnings of the team.  according to ed bouchette, a beat writer for the steelers for the pittsburgh post gazette, the 1934 team that wore these uniforms and went 2-10 was, for some reason, particularly near and dear to the heart of The Chief, and in this the 80th season for the franchise, it makes sense to pull something from the archives and dust if off, especially if it was something that art rooney sr. would have liked.  they are not meant to look great by modern sensibilities.  the steelers aren't trying to appeal to your contemporary asthetic.  they are called throwback uniforms, and if they make you feel like you are watching a bunch of guys right off the set of o brother where art thou, fresh off the chain gang, then, well, frankly they've achieved their purpose.  i appluad the team for not trying to update it too much. 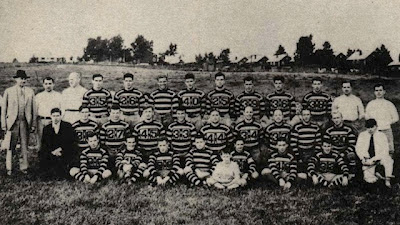 the 1934 steelers (actually called the pirates at that time)

3.  because it is a smart move for the franchise for a few simple reasons:  money, money and money.  when teams wear these uniforms, people buy them.  and that puts more money into the whole steelers machine, which, in turn, can be a part of continued success for this storied franchise.  don't kid yourselves, money is a significant reason why teams decided to go for these throwback uniforms.  i don't have statistics to back this up, but i have my own eyes, which show me that hardcore fans will spend money (these will be going for $160 a pop!) to get one of these jerseys to add to their collection, or to hang on their wall, or whatever.  no matter how many people complain about how ugly they are, people will buy them.  that's the business end of the nfl, and it is not to be trifled with.  it is a critical part of success in the league today.

i, for one, kind of like them.  i think its fun to see my favorite team wearing something different, especially something that this same franchise (by a different name) would have worn 80 years ago in this same city.  that's pretty cool.  plus, it makes me want to jam out to yellow and black attack.

go steelers!  may your bumble bee jail suits bring you epic home victories on your way to that 7th trophy.

Happy said…
You're the only sports writer I ever read so I have no choice but to heed your words.

I hadn't seen the new throwbacks yet, but I'm not going to complain about them now! I'm on board!