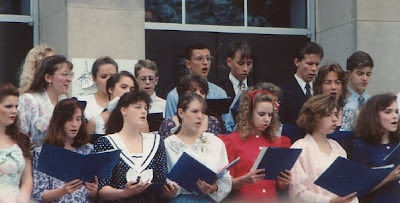 today, on this holy saturday, i thought i would go all old school on you.

when i was a teenager i was VERY involved in my church, and that was a really good thing for me, as those were some of the most formative years of my life.  i owe so much of my current situation to that foundation.  anyway, part of that involvement was singing in the church's youth choir.  as part of that choir i was able to go on a couple different tours in different regions of our country.  i'm not sure i remember any of the songs we sang except this one, for some reason.

it was easter morning, circa 1993.  we were on the front steps of our church (wilmore united methodist church), and it was awful early to be singing, as i remember.  we were singing a song that i had already known, a song performed, among others, by a band called "2nd chapter of acts."  i believe it is called "easter song."  the picture above is a picture of this actual performance, and i am the dude in the back row, in the middle - the only one who is actually looking at the conductor.  you can also tell it is me as i have a classic milinovich look on my face which says, loosely translated: "
this is the most intense moment of my life.  i have to give 120% here or else i will be a total failure and if i mess up and hit a wrong note then my entire life will be ruined and everyone will be disappointed in me.  focus!  give it your all!  don't mess up!  AHHHHHHHHH!!!!"

i actually am saying that to myself (and with the same look on my face) about 80% of the time.  it is part of my milinovich inheritance.  in fact, i have that face on right now as i am typing.  (note to self: talk to therapist about the self-loathing i feel when i make a typing error).

anyway, the good news which i was singing about then and which i am still celebrating today is that all my mistakes (even the real and serious ones) are forgiven and redeemed because of Jesus.

and so, without further ado, here is 2nd chapter of acts singing the very repetitive and slightly annoying "easter song."  as you listen, just picture that adolescent agent orange singing his heart out as seriously and sincerely as possible.  at least get a chuckle out of it.  my therapist will help me through it.

monica said…
I think you have posted that picture before. Who is that girl with the glasses and long hair on the far left. She is looking at the traffic or checking out a guy or something. She is totally not looking at the conductor. :)

I was cleaning out our basement this week and found some notes from high school, from you and Joe and Pete. They were so honest and kind and full of love. It made me thankful for the rich soil of friendship we all had in those formative year. It has helped make us who we are today.
8:54 AM