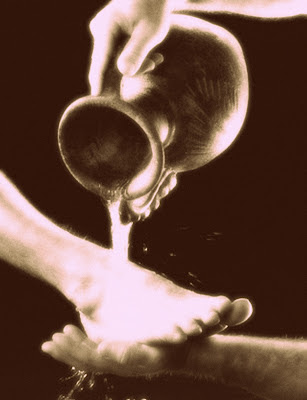 we're outnumbered.  that's what having that third child does to a family: parents - 2, children - 3.  if the family were a democracy, then we would be eating captain crunch and root beer for every meal.  this majority problem leads to all sorts of unintended consequences, including the necessity of the parental zone defense, in which one parent, who in the old man-to-man defense only needed to worry about one child, now has the responsibility to look after double that (2 children, for the math-impaired).

when you have a baby, sometimes you let that baby "cry it out."  i'm not saying that you go all dr. spock and let him scream for hours on end, but i'm saying that you just can't always run to him at the first little whimper.  if mommy is making dinner and daddy is busy playing legos or thinking deep thoughts, sometimes baby will just have to work it out for awhile.  sorry, dude, but you're the third child.  this is your destiny.


today is maundy thursday.  it is so called not because it feels something like a monday, but because it seems to be derived from the latin word mandatum, meaning 'mandate' or 'command.'  okay, so we are essentially calling it "mandate thursday."  but why?

well, this is the day that we remember Jesus' last supper with his disciples, a meal which began with Jesus doing something rather unorthodox.  in a classic illustration of leading by example, Jesus grabbed the pitcher and basin and bent down before his disciples, taking their nasty-old feet and putting his hands on them, washing the dirt and dung off of them.  as uncomfortable as this unusual arrangement may have made them, he did it to prove a point to them.  he said it right after he finished washing them, and you can read it in john 13.  "a new command (mandate) i give you" he says, "love one another.  as i have loved you, so you must love one another.  by this everyone will know that you are my disciples, if you love one another."

and so generations of Christians have been challenged by these words that tell us that if we are really going to go by the name "christian;" if we are really going to try and follow this man whom we believe saved us from death, then we must obey this command to love one another, a command illustrated by Jesus in the washing of feet, not only of his friends, but also of his betrayer.  we don't just wash pretty feet, or clean feet, but all the feet of those who are placed in our path.

i continue to learn grace and to meet God through the masterful teaching of my children.  they are my teachers.

a few weeks ago shannon was making dinner and i was doing something that i don't recall right now, possibly thinking of great ideas for my blog, and quin had decided it was time to wake up from his nap prematurely.  so he cried.  since details necessitated a breakdown in the zone defense, he was left on his own to cry it out for awhile.  this would have likely continued until such a time as dinner was served, but then something happened.

caedmon took it upon himself to go and help the fussing child.  the crying stopped.  after some time had passed, and the quiet had become suspicious, shannon went into the baby's room to see if everyone was okay.  there were tissues and babywipes lying in heaps around the base of the crib, and quin was making happy noises.  there was a recently-full bottle of anti-bacterial hand sanitizer in cade's hand.  struck by the curious sight, and more than a little worried, shannon asked what was going on.  caedmon then explained that he was washing quinton's feet with the sanitizer and the (dozens of) babywipes.

the baby was upset.  so he washed his feet.  without being asked to, he served his brother.  with no hope for reward or recognition.  just thought it would be a nice idea.

"a new command i give you," said Jesus.  "and that is that you figure out a way to love each other by serving one another.  if you want people to know that you are following me, you will prove it by loving one another."

even if it wastes the baby wipes or dispenses the better part of a bottle of anti-bacterial hand sanitizer, you'll step in when the baby is crying and the mommy is frantically trying to get dinner ready and the daddy is busy with something-or-the-other.  you'll stick your fingers in between the toes and wipe gently and stop the crying.  you'll help.  you'll serve.  you'll wipe.  you'll love.

that is the command.  thanks, cade, for reminding me again.

Mary said…
amazing story Greg. Little one's are so inspiring. Thanks for sharing!...and give those little boys kisses from their teta.
12:08 PM

Happy said…
love your blog for stories like this.
12:40 PM