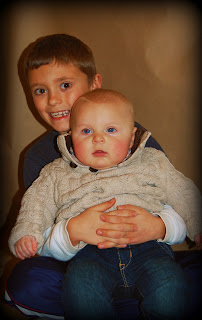 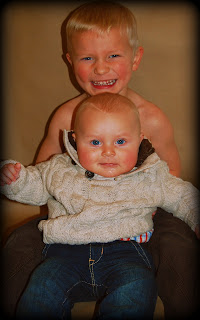 aren't they cute?  those boys of mine?  so cute and full of squeezable cuteness and cute squeeziness?  i just want to squeeze them.  in a good way.

but that's not what i was thinking on saturday night.

saturday nights are sort of important nights for me.  i mean, for sleeping.  see, i get up in front of my congregation each sunday morning and read the word of God and make an attempt to interpret that word for the community, to try and proclaim God's good news for our world, for our community, and for the individuals of our church while also trying to challenge each listener to renewed hope and dedication to discipleship.  it is a monumental task, at least to me, and one i don't take lightly.  which means that on saturday night, i like to prepare by sleeping.

there is one night a year that makes this endeavor particularly challenging.  springing forward.  i love springing forward, to be honest, as i want my evening daylight, but can't we spring forward on a friday night?  saturdays just don't work for me.  i have to go to bed an hour earlier than normal and even though i try to trick my mind and body into thinking i'm tired, my mind and body are not so easily tricked, and they know better.  in order to prove this point, they both turn on the hyperdrive.  i start thinking a million thoughts a second, and tossing and turning as if the bed was made of hot coals.   so restful.

knowing that you really want to fall asleep makes actually falling asleep that much more elusive.  can i get an amen?

ahhh, but sleep eventually won.  at some non-descript moment, my vindictive mind finally succombed to the inevitable and drifted off into sleep.  this felt like it might have been mere minutes before 1am when my alarm clock rang.  yes, one a.m.  you might wonder why i was getting up so early.  well, you see that cute blond squeezable boy at the top in the picture on the left above?  yeah, he is having some trouble getting through the night without letting loose the entire contents of his bladder.  so, in an effort to help him with this, we've been trying to get him up in the night to get him into the habit of waking up and going to the bathroom.  so, the alarm rang at 1am and i stumbled into their shared bedroom to get him out of bed.  but as i staggered towards his bottom bunk, i was slapped in the face by the strong odor of vomit.  i knew that Jack wasn't feeling too well when he wwent to bed, so i instinctively grabbed the railing for the top bunk to look over it and take a peek at him, and that was all i really needed.  instead of the feel of cool smooth varnished wood, i felt chunky, wet stickiness.

jackson is such a heavy sleeper that he threw up in his bed, all over everything, and then just kept sleeping.  just to see if my night was going to get even more awesomely awesome, i checked out cade, and, you guessed it, he had already wet his bed.  i almost started crying.  instead, i turned on the light and woke them both up.  got them out of bed, and started removing every sheet, pillow, and stuffed animal from their beds.  by this time shannon and joined me in our early morning family gathering.  we started the laudry, cleaned vomit off of the floor, cleaned bodily fluids off of our offspring, and got them all set in bed again.

after all of this, and after scrubbing every possible skin cell off my hands, i went back to bed, buy by then the hyperactivity switch had been reactivated.  so i did the obligatory tossing and turning for 20 minutes before getting up for pop tarts and milk and some batman: the animated series.  sometime around 2:30 i decided to go back to bed.  sleep came eventually.

sometime before my alarm was set to ring (again) at 5am, i woke up on my own, with a stinging sense of impending "oh crap."  i knew that shannon had been up with the baby in the meantime, but i just had a sense that something else wasn't quite right.  a few seconds later, as i practically crawled toward the bathroom, it hit me: more vomit.  yes, jackson had gone for the encore performance, and continued to sleep in the outed contents of his stomach.

i just shook my head, and prepared to go preach God's word.  just another night in parenthood, with my squeezably cute kids and their bodily fluids.

Happy said…
I really hope to work the phrase, "awesomely awesome" (with sarcasm of course) into conversation soon.

Hope everyone is on the mend over there! They are cute~ but I'm sure they're vomit is not.

But it did make for a rather entertaining blog post.
12:05 AM

Mrs. Milinovich said…
Just remember that which does not kill us makes us stronger. You should be feeling pretty strong this week! Oh, the joys of vomit in the bed, hair, and stuffed animals. Gotta love it!
7:46 PM