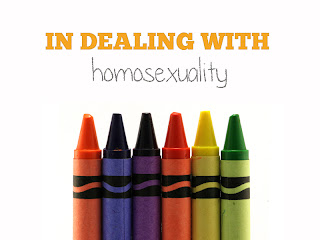 this sunday in church as we continued our series entitled "when christians get it wrong," we dealt with that ever-so-sensitive topic of homosexuality.  in some ways, i suppose, i have avoided talking about thsi from the pulpit for some time, and, in other ways, i have been wanting to preach about this.  basing this sermon series on adam hamilton's book "when christians get it wrong" gave me the perfect opportunity, since his book has a whole chapter devoted to this subject.

and it should, because our position on this particular issue is - unfortunately - how we have come to be defined in our culture.  in the recent barna survey which lead to david kinnaman writing the book "unchristian" (which is well worth checking out), 91% of the unchurched people surveyed chose the word "antihomosexual" to define christians, thus becoming the most widely chosen word among a total of 20 (10 positive, 10 negative).  so, to make it clear, among those unchurched folks surveyed, christians weren't known for being merciful, for our commitment to justice, or for our love, but for being "antihomosexual."

this is christians getting it wrong.

and yet i have always been very hesitant to preach about it too much.  living, as i do, in the heart of central pennsylvania, in a region that is markedly conservative, i have wanted to avoid burning bridges.  i have wanted to journey with the people of my congregation, not try and push them over what they may perceive to be a precipice.  and yet, it was time.  we've been talking about getting it wrong about politics, science, other religions, and so i had to deal with this issue.  but, i must tell you, i was very anxious about it.  not so much about what would come out of my mouth, but about how it would be received.

after i read the text for the morning from acts 10, in which peter has his remarkable vision about what was previously unclean (all kinds of food) becoming clean, there was a pause before i started the sermon.  in this silence, while people anxiously awaited to hear what their pastor was going to say about this topic so often avoided, one voice split the silence in two, boldly.  it was the voice of a child.  and the child couldn't have better expressed my inner turmoil at that moment.  he vociferously proclaimed: "UH-OH!"  i laughed.  the congregation laughed.  and it seemed to take the edge off of the whole moment.  i preached the sermon, and we continued to worship the God who loves us with a love beyond our imagination, and calls us to love others likewise.

as for the sermon itself, i was basically just trying to get people to realize that faithful Christians and serious scholars from all around the globe are going to have to learn to live with great diversity of opinion on this issue.  we all read the same scriptures, but we all don't understand it the same way.  and we are going to have to love each other in the midst of that.  i said a whole bunch more, of course, but i'm not going to spoil it here.  if you want to hear my sermons, you should come to our church!  seriously, you should come!  we are doing some new things, growing in new ways, and living into a new vision that God has given us to become a community of hope in a place that has come to be marked by despair.  so, come and join us.  we get it wrong sometimes, to be sure.  but we are working on it, trying to remember that what we are called to be is known for one thing, and one thing only: not our judgment, not our upstanding morality, not our firm principles, not our purity, but for our love.  messy, dirty, colorful, hopeful love.

greg milinovich said…
very kind words, indeed. thank you for blessing me with them today.
4:44 PM

We can barely make it on time to the church that's a half an hour away. We are pretty pathetic.

I'm so glad for the little "uh oh" voiced by a child that eased so much tension in the room and in your heart a bit.

Was thinking about you on Sunday and hoping your message was received in love.
12:10 AM