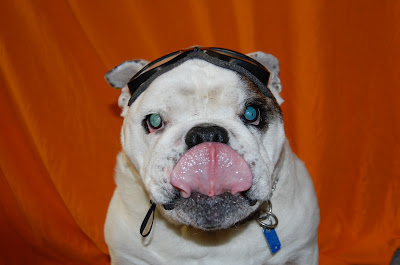 yesterday was the 11th birthday of our dog max.  we adopted him a decade ago and  inherited his almost-cliche name, but at least gave him the dignity of formalizing it into: maximus drake milinovich.  every dog deserves a middle name.  max's happens to be in honor of the late great british musician, nick drake.  however, whatever dignity we afforded him by extending his nomenclature was soon reclaimed by us as we insisted on treating him like our first child, posing him in various situations and outfits just to hear ourselves repeatedly proclaim, "look how cute!"

you can tell from these pictures, for example, that max is either into amateur piloting or was made to wear these goggles by his dignity-denying adopted parents.  as much as i want to say it is the former (how cute would it be to see max piloting a small plane, ala the red baron?), it is obviously the latter.  these pictures are part of a photo shoot we did with max for our 2011 christmas card.  i've got about 25 different ones of these, all photos of various levels of doggy discomfort.  but he is such a trooper.  he clearly did his best to grin and bear it, and the results were well worth it, in my humble opinion. 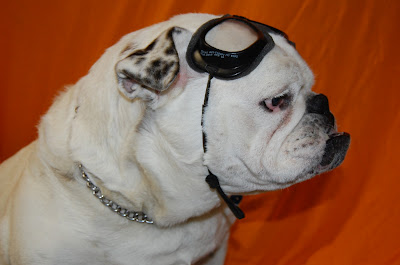 in any case, yesterday was the 11th anniversary of his birth, and i'd be willing to wager that he's got a sore little dog tail this morning after wagging it so much yesterday due to some extra lovin and snackin and singin and playin.  he even got to eat some bacon.  real bacon.  it doesn't get any better than that (well, except for lifting off the ground in a small aircraft).  a recent british study concluded that the average lifespan of an english bulldog is 6.5 years, while the akc puts it at 8-12 years.  either way, max has lived into a ripe old age and enjoys just about every quality of life you can imagine (other than the small aircraft thing).  he is a blessed dog, i think, but he is also surely a blessing beyond description to this family, and has been for more than a decade now.  first he was an only child, and then he slowly had to give up all that attention, one human child at a time.  but he has handled it all with tail-wagging, heavy-snoring grace.  we love you, maximus drake!  happy birthday! 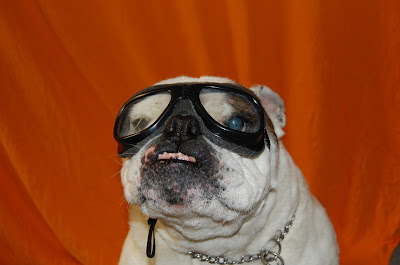