leave me alone. don't talk to me. 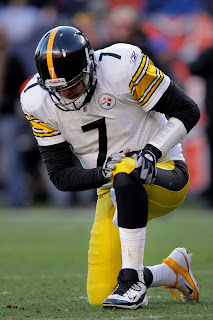 even big ben likes to tebow

bet you didn't think you'd hear from me today, huh?

-well, i'm mostly in denial mixed with shock.  i keep coming to, and thinking, "oh, good, that was just a terrible nightmare that didn't really happen."

and then i realize it did, and dry heave.  again.

-if i were a professional athlete, i wouldn't wear Jesus on my sleeve the way tebow does for the same reason that i don't put Jesus stickers all over my car.  i know i'll do things that Jesus would never do.  like when tebow ran for 9 yards last night, then got up and flexed his arms while screaming right into the face of the prone defender.  yep.  that's what Jesus would do, tim.  nice work.

-if i wasn't a pastor, my facebook status would be:  "leave me alone.  don't talk to me."  but that's probably not the most pastoral thing to do, so i have to temper my disgust a bit.

-plus, my eyes hurt too bad to look at facebook anyway.  they are extremely sore after i repeatedly stabbed them with rusty nails dipped in poison.

-the broncos quite simply outplayed the steelers.  one caveat:  the steelers were missing 5 key players for a majority of the game, not to mention ben roethlisberger, who was only a fraction of himself.  denver won fair and square, but it stinks for a team to get beat when you simply aren't able to put your best team out there.  both hampton and starks hurt their acl's in the game, and keisel left with a significant groin injury.  it looked like a preseason game at times for the steelers.

-you know who i feel bad for (besides myself)?  ryan clark.  dude wasn't allowed to play because of a blood condition that doesn't like altitude, and his absence ends up being a significant factor in the game.  that must be hard to swallow.

-i try to stay away from the steelers discussions on the web on days like today, but i confess i did peak.  people are being typically reactionary and chicken-little-ish.  they went ben released.  they want to fire tomlin.  two words:  shut up.  just shut up.  tomlin is a great coach, ben is an amazing quarterback, and steelers fans are spoiled rotten with a team that is consistently in the playoff mix.

-this was a really fun season, full of all sorts of ups and downs.  we got to play an extra game, and it just so happened that our injuries were too bad and our luck ran out.  it happens.  what can you do?  you simply stab your eyeballs with something pointy, kneel to the porcelain bowl (tebow-ing?), and wait til next year.  oh, lots of chocolate seems to help, too.

-when do pitchers and catchers report?

Happy said…
i'm just wondering if the "leave me alone, don't talk to me..." applies to comments as well?

spring is right around the proverbial corner...and not too far behind that...steelers training camp. hang in there till, then greg.