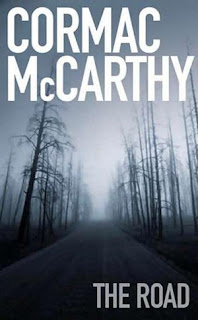 well, it may be hard to believe, but i finished yet another book this week.  this time i finished cormac mccarthy's pulitzer prize winning novel "the road."

not the "oh my gost i loved it so much and can't wait to read it again because it takes me to a happy place" awesome, but more like the true meaning of the word.  the book inspired awe.  and fear.  and the smallest little embers of hope, too, which i suppose, is where the book's greatest power lies.

it is a bleak tale.  well, bleak doesn't even begin to describe it.

first, a note about the style.  i've never read a mccarthy novel before (he's written several popular books including "no country for old men," and "all the pretty horses," to name a few), so i don't know if all his books are like this or not, but the book didn't include some basic grammatical fundamentals like complete sentences or quotation marks.  it took me awhile to adjust to this, but once i did, i rather enjoyed the style, including the very terse conversations between characters written without much indication as to who's saying what.  i was talking to a friend about this yesterday and he pointed out that i, too, have a disdain for grammar and proper punctuation.  as i reflected on that, i figured i ought to be clear about one thing to my readers:  i have a disdain for capital letters, that is true.  i have no problem with grammar, though, so if it appears that i have chosen to reject the basic rules of grammar its not because i'm choosing to.  it's because most of my time of learning the fundamentals of grammar were at jessamine county high school in the middle of kentucky.  so, i done did pretty good for learnin' me some grammars.

secondly, my thoughts about the novel itself.  (i recognize that that sentence was a fragment, so maybe i do choose to eschew the rules of grammar after all.  hmmm.....i'm going to have to think about this).  the novel is set somewhere in a future america, presumably along the eastern seaboard, possibly in new jersey or maryland or even maybe a bit further south.  it's hard to say.  mccarthy never tells you.  the book has two major human characters, a boy and a father, whose names we are never given.  we simply know them as the boy and the man, and we know that they are following the road through a countryside that has been ravaged and raped by some unnamed disaster.  everything is ash.  and black.  and eaten.  there is not vegetation, and no animal, save for one dog they hear in the distance.  there are almost no humans, except for the few who have banded together in gangs of cannibals.  it is a harsh and dark and hopeless world through with the boy and the man traverse.  it is so grim, and yet oddly compelling, partly because of the man's determination to protect the boy and the boy's quickly-dying innocence.

i had read the one-liner reviews on the back cover of the book, and someone from time magazine or the new york times or some such reviewer of literature, claimed that it was a tale of redemption, so i turned each worsening page clinging to an expectation that something wonderful would happen.  and it did, i suppose, but not in the dramatic or neat way i might have subconsciously wanted.  let's put it this way: the story doesn't end with a wedding.   and yet, for it's own way of saying that when all is lost, all is not quite lost, i appreciate this work.  it is stunning in its comprehensive description of a burnt-out world, and it has tainted the way i look at the world around me.

yesterday i drove down rt. 147, south out of  sunbury through herndon and along the west side of the susquehanna river.  if it had been a bright sunny autumn day, i'm sure the drive would have been stunningly beautiful.  but it wasn't.  it waa a damp, cold, and dreary january day, punctuated by bits of leftover gray snow, hanging onto the landscape like some shapeless gray roadkill.  as i drove the 40 minute drive to my destination, i was transported to "the road." i couldn't escape it.  i began to imagine that every home and car that i saw along the way had long ago been abandoned and ransacked for anything of use.  i imagined myself walking on that road, with the air full of the ash of a burning land.  it wasn't hard to imagine, as i saw so many burnt out houses, barns, sheds and old cars that i soon began to feel a bit lost in that land between fantasy and reality.  it didn't help that it seemed like no one else was driving on rt. 147 at about 11am yesterday.  i drove through the town of herndon without seeing another soul, or even, it felt like, any evidence that any soul had been there anytime in the last 5 years.  the world felt gray.  and empty.  and dilapidated.  and rusted.  and marked by spray paint.  and punctuated by ads for divorce lawyers.  and turned over and overtaken by the relentless power of nature.

i was on the road.

mccarthy's exquisite book reminded me of all of that, despite it's grim portrait of the future.  and i am grateful for having read it and been reminded of it.