December 07, 2011
--oh, how i love thee, random posts.  i don't have to spend hours thinking about what i'm going to write.  i just sit down and see what comes out.  it's liberating.

--'new girl' with zooey deschanel is seriously one of the best shows on television. her charm is unstoppable and irresistible.  the supporting cast is really fun.  now that i think about it, it's sort of like "friends" for 2011, with less hairspray.

--yesterday caedmon looked at our stockings hanging on the mantle and said, "why do we have these giant socks hanging here?"  i guess he isn't big on Christmas traditions yet.


--last night was my turn to cook. so i had to make a tough choice between ramen noodles or papa johns. i think you can guess which one won.

--our church is doing a christmas play called "live from bethlehem" this sunday afternoon.  if you're in the sunbury area, you should come check it out around 1pm on sunday at our church.  it'll be worth it just to see caedmon sing away in a manger (if he does it anything like he did it at the nursing home this weekend); it comes complete with a dramatic rock-star ending in which he ends up on the ground.  seriously.  he is so dramatic.  no idea where he got that.  here's a a picture of shannon holding the largest baby jesus you ever saw. 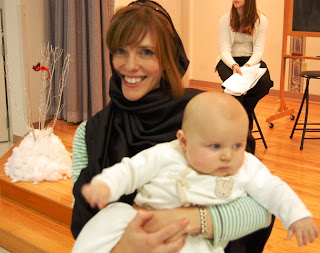 --'tis the season for Christmas music.  amazon.com is giving away a song every day.  some of them are awful, but there are some gems, too.  i love Christmas music, especially since i have about 700 Christmas songs that i can just put on shuffle and fa-la-la-la-la my way through the day.  here is one of the more amusing ones.

--the steelers play the thursday night game this week, which means that they play TOMORROW NIGHT!!!  i've said this before, but in my paradise, the steelers play doubleheaders every day, and win them all.  this week the steelers look to move to 10-3 against the browns.  as with most of the other teams we've played this year, the browns will probably put all their emotion into this game, wanting to beat the reigning afc champions, not to mention a division rival.  they would love to spoil our playoff run.  so the steelers better not take this game lightly.  you hear me, steelers?

--we ran out of cream for our coffee this morning, so after i took jackson to the bus stop i went to the grocery store.  in my batman pajama pants.  i've sunk to a new low.  but i needed that cream.

--everybody have a great wednesday.

--ps.  it was pizza, in case you were wondering.

Mary said…
Clinton and Stacy would not be proud of you and your grocery store attire. Ask shannon if you can't remember who these important people are.
12:01 PM

greg milinovich said…
oh, believe me, i know who they are. i was worried the whole time i was in there that they were watching me on a secret camera.
1:12 PM

peggy said…
oh how we miss your humor around here! great post today! your boys are sure to provide you with many years of fun activity and honest expression ... they certainly have a great mentor!
Went to a small luncheon yesterday ... a few ladies from CUMC ... were your ears burning? Several "greg stories" were thrown about!
5:33 PM

Mrs. Milinovich said…
Seriously, one of the cutest baby Jesus's I've ever seen. His Aunt Julie was pretty cute in the manger too (many years ago). BTW, I hope you weren't wearing slippers too! Gross.
8:37 PM

greg milinovich said…
@peggy: i can't believe that there are any stories to tell about me! :) thanks for the smile.

@mom: no slippers, but i was wearing steelers sandals. probably not any better. i'm a mess.
8:40 PM