one step away from jerry springer 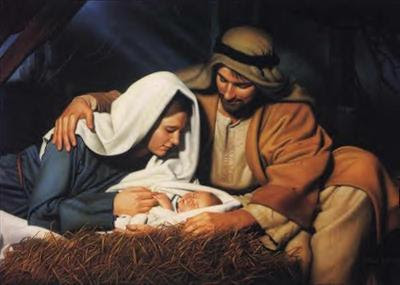 as i prepared for last sunday's sermon on joseph and the town of bethlehem, i was struck with a realization that, while i'm sure i've had before, felt more poignant and powerful than ever.  (does this ever happen to you?  you already "know" something, but then you somehow relearn it, or come across it in a new way, and it nearly slaps you in the face?  happens to me all the time).

it's about Joseph.  who found out that his betrothed was pregnant.  and he knew he hadn't been the reason.

we don't know many details about how this all happened, but one very reasonable possibility is the one that adam hamilton puts forth in his book "the journey," which suggests that mary probably gave this news to joseph while she was in ein karem, visiting her cousin elizabeth.  bethlehem, joseph's hometown, was only a few miles away, and it is likely he would have come to visit her during this time.  but it wouldn't have been a very good visit.  she had to tell him the news.

we can only guess at how he reacted, but i gotta think that it wasn't pretty.  at least not at first.  no one reacts well to being so deeply hurt.  sure, mary would have told him that she wasn't unfaithful, that indeed it was the Spirit of God who had made all this happen, but Joseph simply didn't believe her.  don't believe me?  look at what the gospel of matthew says.  the bible tells us that joseph planned on dismissing mary quietly.  in other words, he was looking for a way out of this betrothal.  because his betrothed, he thought, had been less than faithful.

in fact, one can imagine him walking back to bethlehem from ein karem, thinking about these very things.  feeling hurt and angry.  this story is about one bad decision away from becoming a jerry springer episode.  joe knew that he had a great deal of power in his hands, because the law was clear on this point: the punishment for adultery was death.  if joeseph had chosen to go the legal route (and he would have been "justified" in doing so by the law, and probably by public sentiment, for the most part), mary would die.

but something happens to Joseph's thinking.  either in a matter of moments, or days, or weeks, we don't know for sure.  but he decides that he will take care of the matter as privately and quietly as possible.

now, we have often thought, "wow. what a great guy."  but there's more to this picture than we often realize.

think about it.  what's going to happen if joseph and mary separate quietly, and then people start to realize that mary is pregnant?  they will, of course, ask how things are going with Joseph as the marriage date approaches.  she will have to tell them that they are no longer betrothed.  and then what will people begin to assume?  well, that joseph and mary violated the terms of their betrothal and slept together.  this would be a huge disgrace on joseph.  he would suffer shame and dishonor.  his family would suffer great financial loss as they would have to pay the full dowry to the mary's family.  according to law, it seems joseph would have had to pay a kind of child support to mary, as well.  joseph would carry this reputation around with him for the rest of his life.  and all because he couldn't bear to see his betrothed executed for this infidelity.  in other words, he had compassion.

of course, the story changes here and joseph finds out, through a dream, that mary was telling the truth and that he should continue the engagement and marry her and take the son as his own.  and joseph is obedient on this point.  but i think we too often gloss over all that has come before the dream.  matthew tells us that joseph was a righteous man.  and yet we often miss what it is that makes him righteous.  it is most certainly NOT a strict adherence to the law.  it isn't a firm sense of justice.  instead, it is compassion.  it is his decision to value life and mercy over justice and rules.  it is his ability to place the person over the punishment, even though he had been badly hurt, and would continue to face consequences for this action.  joseph, for as little as we know about him, is a great model of compassion for each of us.  and one that we need to pay attention to.

where are we lacking compassion?  where  is it that we are more comfortable to rely on the "law" to justify our behavior?  the law might be civil law, or church law, or even something we might call "biblical law," in which we believe the bible is clear about something.  we hide behind these laws, and let them make decisions for us, so we don't have to deal with the messiness of life.  the church today is struggling with this very thing on a host of issues.  i suspect many of us are in the same wrestling match in our own lives, as well.  the challenge that joseph gives us is that we must place the value of a person over and above the value of being right.

maybe it's a lesson jesus learned from joseph.  after all, he did tell us that a great name for our loving God is abba, or daddy.  maybe he learned some important life lessons at the knee of his abba.  maybe he learned that the greatest law (or rule) of all, is to love God, and to love others.  it certainly is something that joseph understood and exemplified.  what about us?

cathyq said…
Good insight. I have always liked Joseph and felt that his role in the life of our Lord has been greatly overlooked. Obviously, he took the role as the earthly father to the child Jesus. His compassionate nature, no doubt, was needed in the situation. Yay Joe!
4:49 PM