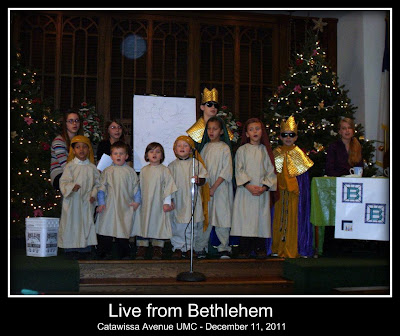 yesterday our church put on a great play called "live from bethlehem" which involved so many different people from different age groups, from a 4-month old all the way up.  it is very worthwhile to be a part of something so much bigger than yourself, and to have such involvement from across the church community.  we performed the play at a nursing home last week for around 100 people, and then again at our church yesterday for well over a hundred.  all in all, we had tons of fun, and hopefully got across the message of Christmas in a fresh way.

in the picture above you see some of our children who are busy singing 'away in a manger.'  i hadn't realized it until rehearsing for this play, but cade is clearly a microphone hog and drama king.  he wanted to be front and center everytime and really sing into that mic.  during one of the performances he swayed dramatically near the end of the song, finally collapsing at the final note ala jimmy hendrix or janis joplin.  very rock-n-roll.  of course i don't have any idea where he would have ever seen such behavior. 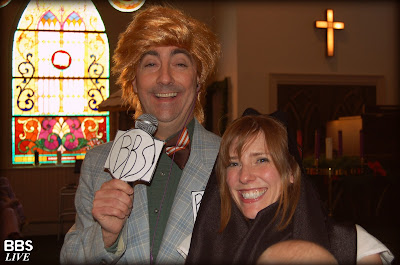 here is shannon - aka esther - with a field reporter from the BBS (bethlehem broadcasting system) doing a live interview about the journey to bethlehem.  she is a total ham.  the field reporter, by the way, is played by my doctor, in whom i have lost a great deal of confidence after this performance.  only kidding.  i think.  i'm just praying he doesn't wear that wig next time he needs to check me for a hernia. 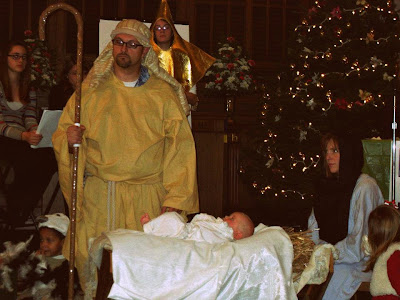 and then here is the (un)holy family.  the star role is played by our son quinton, who at 4 months old and 20-some pounds is the biggest baby Jesus ever, but at least he was relatively silent for the silent night portion of the show, which is more than we can say for the rest of the cast.

the play dealt with the idea of a news channel covering the birth of Christ.  the odd truth of it, of course, is that if Jesus were to be born into our world today, even with so many around-the-clock news channels and extreme coverage of just about everything, one gets the feeling that this story would slide right under the radar.  a baby being born isn't usually headline-grabbing stuff.  especially when that baby is born to a simple worker from a small town and a humble girl from the middle of nowhere.  the news would likely be much more interested in the latest presidential "flub" or spinning the newest unemployment figures or even telling us what lady gaga wore to this or that awards show.  but the savior of the universe?  the one who would be love?  that wouldn't have even made the religion page.

perhaps the same unfortunate script is played out in our hearts and lives each year.  the greatest story ever told takes a back seat to the rest of what the season has to offer, much of which is good, just not nearly as good.  i, for one, want to make sure that the front page headline of my life during this season is the birth of love, not only as an historical event, but as a personal reality.

Mrs. Milinovich said…
One of the cutest Holy or unholy families ever!
7:15 PM