i love the whole santa myth.  some people find this surprising, since i am a pastor, and there are some cultural expectations that Christians should be militant against the secular portions of the Christmas tradition.  well, you're talking to the wrong pastor for that.

santa claus, of course, is not a secular figure at all, and is a jolly old saint who embodies the christian ideals of kindness, generosity, giving to the poor, and love.  he does NOT, however, despite the way that parts of our culture have tried to hijack him, represent gluttony, greed, or unchecked capitalism.

all of that, to say this.

we went to the mall on monday night to see santa claus (not really santa claus, of course, but helping him).  i specifically got on the mall's website before we went to see what the policies for photography/video were, and to see how much it cost to purchase the pictures which they take.  the guidelines were quite clear.  guests are not permitted to take pictures from within the santa set (emphasis mine), and sitting on santa's lap is FREE.  the cheapest photo option is $22 for one picture.  one picture!  ridiculous.

so, i figured we would sit on the jolly old elf's lap, and i would stand outside the santa set and snap a few pictures and perhaps capture some video of the event, as i've done every year.

however, when we got there and i removed myself from the santa set in order to take said pictures, i was told by one of santa's "little helpers" that  - and i quote - i can't video from there.  okay.  i simply mentioned that their guidelines mentioned no such restriction, and then i started getting my camera ready.  she proceeded to help santa by telling me that there was no photography from there either.  i'm sure i assumed a quizzical look as i explained that i was quite clearly outside the santa set as per the printed instructions right there on the sign.  all she would say is, "i'm sorry.  it's not my rule.  then she mumbled something about the mall's rules, but this was clearly just a lame attempt to scapegoat her mall santa company's greed onto someone else.

let me be clear here.  i don't ultimately have a problem with a 'no photography' rule.  actually, i do, but i would have been willing to abide by that rule, if that had been made clear.  but it wasn't.  in fact, the printed restriction seemed to make it clear that photography was indeed permitted, outside of certain areas.  it was misleading and i was annoyed by this, especially since santa's helper wouldn't acknowledge this discrepancy between the printed rule and her new one.

looking back on it, i wish i would have taken the pictures anyway, since there were no printed restrictions prohibiting what i was doing.  but, alas, i didn't.  i am a dang rule-follower.  so i packed up the camera's.  by this time, the whole family was all upset because i just about got thrown out of the mall by a  matronly elf.  so, the story ends with us  - a fired up dad, an extremely embarrassed mom, and some confused children - awkwardly walking away from saint nick, without any picture at all, not even a grossly overpriced one.

once i cooled off a bit, i remembered that i had seen an old santa suit stuck up on a shelf in the church somewhere.  so i stopped by the church on the way home, secretly put the suit in the car and brought it home.  while the kids went and played, i changed into costume, and then came into the living room with a boisterous "ho ho ho!"  they pretty much immediately knew it was me (santa doesn't wear black rimmed glasses, apparently), but we had fun laughing about it and at least got a picture.  i only charged $15 for the pic, and i even allowed shannon to stand inside the living room to take the photo.  anyway, we got some fun pics and a memory that we'll laugh about for some time. 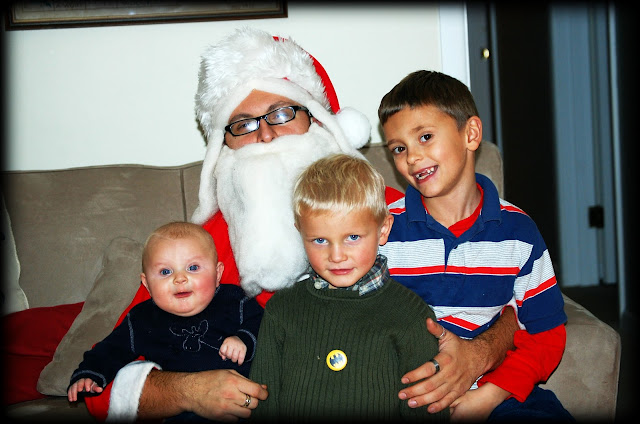 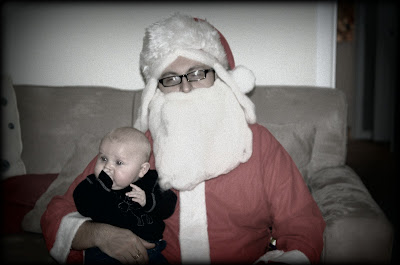 okay, so maybe they're not the greatest pictures in the world, but, hey, at least we didn't pay $22 for a picture that looks like this: 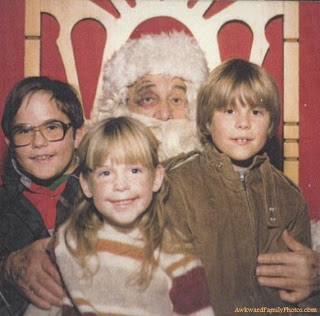 Oh my goodness. I find the fact that you "followed the rules" to be hilarious. Only because that is me. Bill can regale you with many a story (or the one good one from our cruise, which involved a bottle of wine).

As an adult (I'm sure being female didn't hurt) having sat on Santa's lap (on my 30th birthday, sort of a long story) I have a photo, but only because my friend pretty much didn't follow the rules. She pointed at me and said, really? Can't I just take it over here? They allowed her to... now it was first thing in the morning. Maybe you have to catch them early...

I think you should write a letter to the mall. Now that you've cooled off.
12:53 PM

knit one, knit two said…
Didn't they have the memory stick option? That's what we got (it was $20 summat, plus image permission) and then I'd run to Walmart and order prints and use the image in the g'parent calendars. Now we just take the kids to hubby's office party for kids. Free pics but kids ramped up on sugar is a whole different ball of trouble...
4:25 PM

greg milinovich said…
they didn't have a memory stick option. i believe they had a cdrom option, but it also cost i think 30 bucks. again, if they had just advertised that the rule was "absolutely no photography" i would have had no issue. but that's not what it said, and that's why i was (1)confused and (2)contentious.

peggy said…
Clearly fake-mall-santa and his fake-mall-elves missed a great opportunity to photograph YOUR beautiful kids with Santa and use it in THEIR publications ... which they would surely do WITHOUT your permission! I hate all of that almost as much as I hate kids sports photo's. My poor children own none and for years have freely told the photographer not to bother taking their picture in front of the fake background because, "my mom's not going to buy anything anyway." Don't even get me started ... ho-ho-ho.
p.s. love your home pictures much more!
3:16 PM

greg milinovich said…
thanks, Peggy! i was pretty steamed, but i've (mostly) cooled off now. hey, at least my kids have a good story to tell about their dad!
10:25 AM

Crafty P said…
oh yes!- I can soooo relate. We've steered clear of the mall santas- and have always visited "Galleria" Santa b/c he was non-commercial. Just a chair,
with Santa,
some decorated trees,
a rope for guests to wait along.
that
is
it...
until last year when they added the photographer. grrrr

and we had a bad experience with some nasty parents and well, we'll probably just visit the Santa Box at Macy's. LOL
9:08 PM