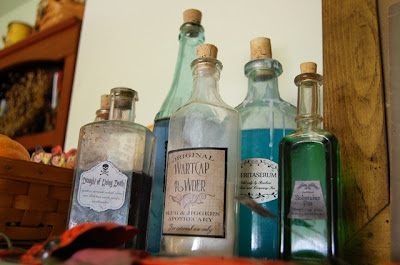 well, we've put away the halloween decorations for the year, but i thought i'd show you one of my highlights from this year.  shannon found a website that had vintage looking "potion" labels featuring many of the potions and powders from the harry potter stories.  you just print them out, cut them out, and then affix them to old bottles (which i happen to have many of sitting around {can you say "hoarder?}).  we filled them with various colored liquids (mostly water and food coloring, with some oils and other secrets thrown in), and capped them off with corks and wax.  they turned out pretty cool, and were a fun contribution to our "magical" halloween decor. 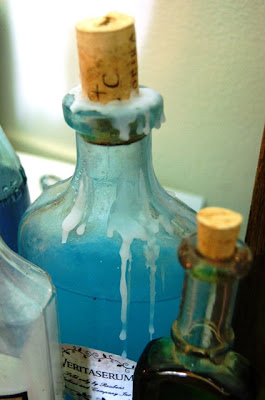 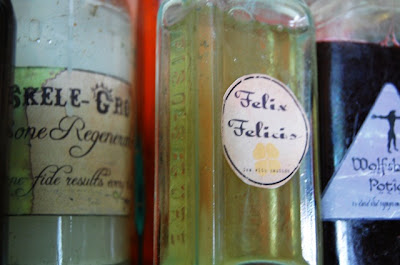 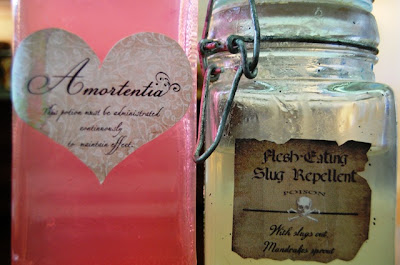 -in other randomness, it is the steelers bye week this week, so i feel like i can breathe again.  first time since september.  feels good.

-or maybe the breathing is a result of the fact that church conference is over and went well.  that is a major stressor for me each fall, and it is a huge relief for it to be in the rearview mirror for another year.  this breathing thing is nice.

-yesterday the boys and i were taking turns making up stories.  mine were pure ripoffs, in that i retold classic stories in which my children's toys come alive when they aren't looking; the dog talks to me when they aren't around, and i took a spaceship to cybertron (okay, maybe not classic).  but jackson's and caedmon's stories all included some kind of conflict (usually involving ghosts, bad guys, king cobra's, etc) and then, without fail, a deus ex machina, literally.  i mean, in each story, right after the bad guy punched caedmon, or the cobra was poised to strike jackson, Jesus showed up and took care of it, punching or wrangling or doing whatever needed to be done to restore peace.  i'm not sure, but for a 4 and a 6 year old, i feel like this is fairly decent theology.  at least, i'm okay with it for now.