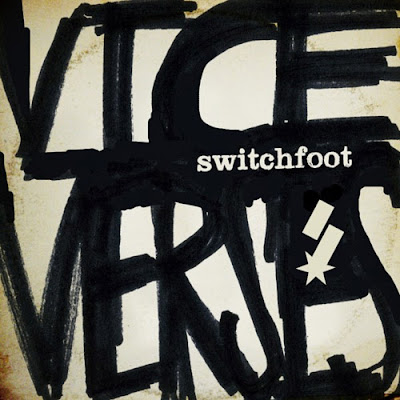 switchfoot's new album "vice verses" came out yesterday, and i've been spinning it non-stop (is it really spinning in an ipod?) since i got it.  i don't know what it is about switchfoot albums that make me want to write reviews, but there's something there because their last studio album ("hello hurricane") inspired me to write a review, as well.  i suppose it comes down to the fact that i just really love this band, and that they keep making art that pleases my ears, feeds my faith, and resonates in my heart long after i push the stop button.  although i've only been listening for 24 hours, this album promises more of the same, as frontman jon foreman's lyrics so often feel like the poetry that lurks just inside my pen that never quite makes its way out.  he just keeps on writing the things i long to say and asking the questions i'm sometimes too scared to ask.  but switchfoot finds a way to say it and ask it and sing it in a way that affirms everything i believe about hope and redemption and abundant life.  if there were a soundtrack to agent orange records, switchfoot would certainly be on it.

this new album, while musically a slight departure from the past, is essentially just the next logical step for a group that's been pushing some boundaries in Christian music for the last 14 years.  while admittedly trying out a more bass and drum-driven vibe, they certainly haven't surrendered the crunchy guitars, soaring choruses and impassioned vocals that have always been a trademark of the band's brand of power pop rock.  while trying out a new musical wardrobe, i think there may be a few misses on this album (especially "selling the news"), but it is forgivable when you consider that the band isn't content just to rest on their laurels and churn out b-sides from previous recording sessions.  they are still working hard to create new and challenging art, and there is not only much to admire about that, but also much that most of Christendom can learn from it, as well.

but where the album really shines, in typical switchfoot fashion, is in the lyrics.  refreshingly honest (where is God in the earthquake/where is God in the genocide/where are you in my heartbreak? -from vice verses), relentlessly hopeful (born for the blue skies/we'll survive the rain/born for the sunrise/we will survive the pain - from dark horses), and contagiously full of life (i wonder/why would i wait til i die to come alive/i'm ready now/i'm not waiting for the afterlife - from afterlife).  the themes have remained essentially true to the switchfoot catalog, but it feels a bit more personal this time, with the title track feeling like the honest questions of a man struggling through some difficult questions, and inviting us to be a part of that.  additionally, there seems to be an added emphasis on the contradictions of life, the vice verses, as it were, of living between life and death, faith and doubt, hope and despair, incredible beauty and terrible brokenness.  the reality according to switchfoot, it would seem, is that God is present right there in the midst of those contradictions and juxtapositions, right in the vices and the verses of life.

this album represents another great addition to the discography of this underrated band, and also demonstrates their commitment to continue to explore their calling as artists and people of faith on a journey.  i highly recommend it.

Anonymous said…
Thank you for writng what I really wish I could have said myself! I personally love the song The Original, I cannot stop listening to all the songs! I am so glad you feel the same as I do about Swithfoot, underated yet amazing, their lyrics have stolen my soul from the beginning many years ago. An unknown band + a mom of 2 young kids roaming around the internet = falling in love with lyrics of a Christian (dont call them that) band! I feel like their mom having been around from the beginning rooting them on! Thanks Greg! cindy
10:28 PM

greg milinovich said…
greg, you can send me the bill...i feel responsible for your purchase.

cindy, thanks for the comment. i'm glad we share a love of this great band. will always associate them and you, even though, i, too, have followed from the beginning when they were some kids singing about the legend of chin.
11:56 AM