September 23, 2011
-happy belated birthday to bilbo and frodo baggins, and a happy belated hobbit day to all of you (it was yesterday, 9/22, in case you were wondering. 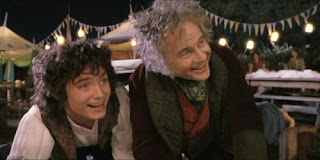 -huge congrats to the yankees who took advantage of an epic free fall by the red sox and wrapped up the division this week, making them the champions of the american league east.  also a big shout out to russell martin, the canadian catcher who is just wrapping up his first year as a yankee, for giving the press this amazing quote, "i hate the red sox."  couldn't have said it better myself.


-congrats to me on my first fantasy football win of the season.  it is likely my only win of the season, as my team stinks, but it was nice to at least visit the win column once.  it's like a one-time vacation from my normal routine the loser land, where i'm forced sit around and chew my fingernails, hoping that my kicker will somehow kick 17 field goals in one game in order to get me the win.

-in retrospect, i wish i had chosen all pittsburgh steelers for my fantasy team.  i would still suck, but at least i could just root for my own guys and not have to worry about it.

-parks and rec = aweseome.  ron swanson's beard = even more awesome.  the office without michael scott = okay.  it was like visiting a big group of old friends, without the guy who always made things happen.  with apologies to reggie jackson, michael scott was the straw who stirred the drink.

-my prediction on the steelers game this sunday night against the colts?  steelers 24, colts 17.

-preaching this week on nehemiah.  reminds me of a joke my college Bible professor used to tell about the shortest man in the bible:  knee-high-amiah.  groan.

-currently listening to "symphonies" by dan black.  also, the remix by haus of glitch.  ear candy.

-also, i've been reading a walt whitman anthology.  i came across this nugget which i circled and starred, cut out, pasted, and, now, posted on my blog.  gotta keep my eyes wide open with wonder as i discover life and love.  peace. 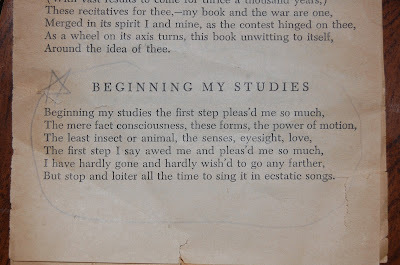