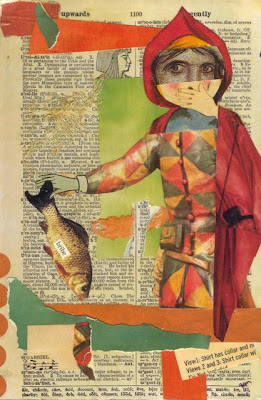 i haven't had much time/energy for collaging recently, but i recently carved out a little time just to glue some things together because my juxtapositional (is that a word?) creative energy was like a caged bird, singing for freedom.  so, i started cutting and gluing, and this is what happened.  i truly wish i had more time to do this stuff, as it really feeds a hunger inside me.  i suppose, like many other things, it is a discipline that i too often neglect, to my own detriment.

speaking of misplaced priorities, we watched an episode of the new show "new girl" this week, and i absolutely loved it.  i was laughing until my belly hurt.  i'm going to be watching more of that one.  the new nbc show "up all night" which has so much potential, just isn't getting it done.

the red sox did not make the playoffs.  this is kind of bittersweet for me as a yankees fan because, as much as it brings me tremendous joy that they had such an epic fail, i sort of wanted them in because they were so bad it would have been fun to watch them flounder in the playoffs, especially if it could have been against the yanks.  but, alas, the red sox will have to be content to listen to the playoffs on the radio while driving around in their cahs.

speaking of baseball, i'll have some pics tomorrow of my family in yankee gear.  it'll be worth checking out.

hope everyone has a great parks and recreation day (oops, i meant thursday).