March 21, 2011
for this week's installment of my collaging my way through lent, i was dealing with mark's version of the story of Jesus and the disciples in the garden of gethsemane.  as i wrestled with the text, i simply couldn't get away from the symmetry of the story with the garden of eden, which i learned from reading adam hamilton's thoughts on the passage.  both of these stories occur in a garden, and both seem to be dealing with temptation between following God's will, or our own will.  the original adam (who in this case epitomizes all of humanity) chose the will of the self, while the second adam, Jesus, chose God's will.  "not my will, but thine" says Jesus in king james english.  but i can't help but thinking that the agony Jesus went through in the garden wasn't so much about how much crucifixion was going to hurt, as it was about how tempting it was for him to try and rationalize another way of doing this that didn't involve the betrayal of his friends and the whole "becoming sin" thing.  he even seems to try and use logic with God: "all things are possible with you," he says to God.  and yet, as he wrestles with this battle of wills, he finally stands firm against temptation (with the help of his Abba), and chooses to leave the fruit on the tree, so to speak.  it's a powerful and dramatic moment, and one that his best friends slept through. 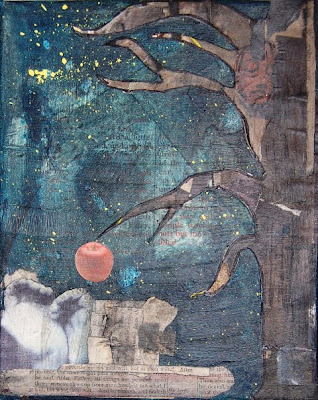 "but thine"
mixed media collage on canvas
march, 2011
for this collage i wanted to make something dark and mysterious looking, and i was trying to make a connection between gethsemane and eden.  you've got hands in the bottom left of the piece that are either reaching for that apple, or maybe reaching out for God's help, but it isn't clear either way.  things are in the balance.  the choice Jesus makes in the garden is a critical one, and i was trying to capture that drama here.  below are some close-ups of the some of the details.  i pray you are having a blessed lent as you make your own journey through these holy days. 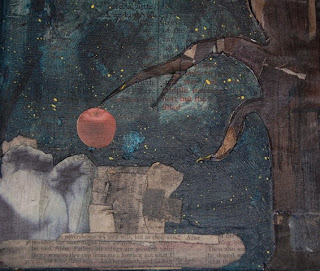 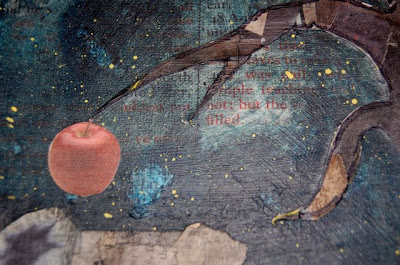 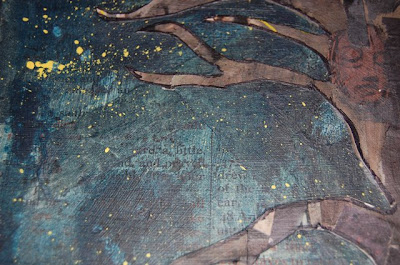 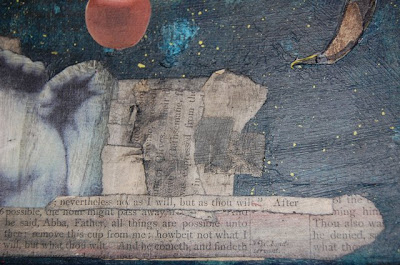