March 14, 2011
as i already wrote in this digital space, my lenten discipline this year is to fully interact with the texts that we'll be focusing on in worship each sunday, and to create some physical expression of my response to that text.  i don't typically give things up.  i need to lose weight, of course, but i have a hard time giving up sweets or chips for lent, because my motives are all mixed up.  am i doing it to sacrifice something, or am i doing it because i will lose some weight?  it gets a little blurry in terms of motive, you know what i mean?
so, last year i decided to dedicate some of my personal time each week to making a collage, expressing my reactions to the texts for worship each week.  i really enjoyed that experience, and thought it made for a much more meaningful lent, so i'm going to try and do it again this year.
so, yesterday was the first sunday in Lent, and our text was from mark 14:12-25, where we read about the last supper.  there is so much richness in this story, but i am always so struck by the word "many."  Jesus says that his blood represents a new covenant and that it is poured out for "many."  i like that word.  many.  not just some.  not just us.  not just the ones who measure up.  not just the ones who follow your rules.  not just the ones who have some decorum and dignity and who don't stink.  not just those with a job.  but "many."
"many" might include the guy on welfare who could get a job, but would rather not.  "many" might include the college student who is wasting their parents money while they casually trade in their opportunity for education for endless nights of liquor and casual sex.  "many" might include the treasurer of the organization who is scraping a few hundred bucks here and there into her own pocket.  "many" might include the losers and the addicts and the bums and the abusers.  "many" might even include me.  that's what we mean when we sing about amazing grace.  it's not just for some.
don't forget that Jesus is speaking this "many" into the context of those who really wanted him to be the Messiah, the One who would set things right for the Jews; who would throw the Romans out of town and establish a new rule where Jews - God's chosen people - would be powerful.  this, you see, is salvation for "some."  but Jesus rejects this plan.  he says that his blood isn't just poured out for "some," but for "many."
thanks be to God for that "many."
and so i made a collage that i've entitled "poured out" which, at least for me, illustrates the point.  it includes not only a map of the world, but about 7 or 8 different languages are represented as well, including english, french, german, welsh, russian, hebrew and more.  the blood that was poured out was for many. 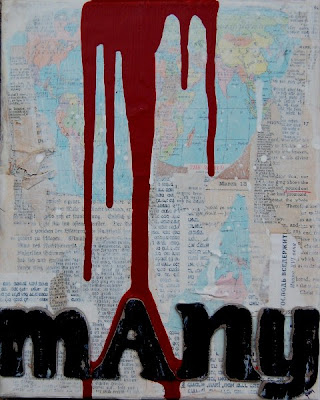 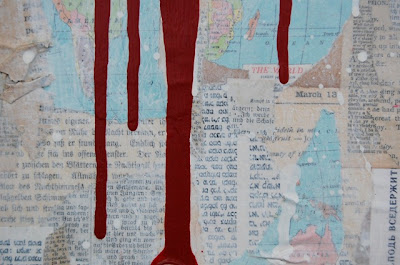 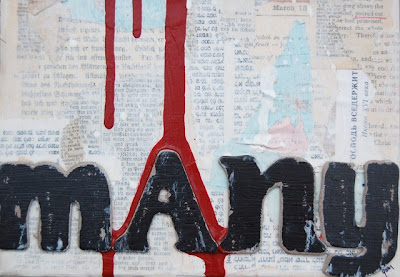