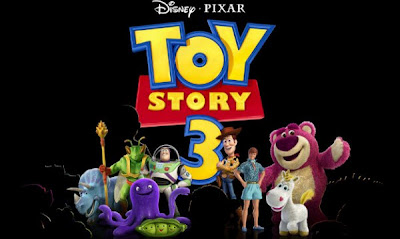 -my kids continue to say the most hilarious thing.  we recently watched toy story 3 on dvd, and when it was over, my 3-year old was playing with his toys singing one line over and over again ad infinitum.  but it wasn't "you've got a friend in me."  nope.  instead it was, "you've got the ham in me."

-jackson, on the other hand, who is now 6, doesn't say as many cute things anymore, choosing instead to debate his favorite theory for dinosaur extinction.  he did, however, coin a new expression in our home recently.  we let him play his nintendo dsi for only a half hour on weekdays, and then more on the weekends.  well, last weekend he got to play the dsi for an extended time, and then watch toy story 3 on top of it.  that night when we were praying and telling God what we are thankful for, Jackson said, "i'm thankful for all the screen i got today."  so now we gauge how much 'screen' we're getting each day.

-back to toy story.  when we decided to go to toys-r-us on monday so jack could spend some of his birthday money, we had said that we would go to the toy store.  cade was running around excitedly proclaiming that we were going to the 'toy story 3!'

-and finally, we've gone through several cases of kleenex this winter, unloading pounds of snot into their soft caress.  but in the process we have apparently confused caedmon as to the proper name for said device.  is it a kleenex?  is it a tissue?  well, if you're cade this is an easy problem to fix.  he just started calling them kleenissues.  and now we all have.  for example, at the end of toy story 3, i was bawling my eyes out, and asked cade to get me a kleenissue.  he carried one to me, all the while singing, "you've got the ham in me!"

my boys and I went outside to play in the 'no and build a 'noman. for some reason, Dominic drops the "s" at the beginning of words and it's still so cute.
9:43 AM

We call that Molly ears (based on one of the youth - her name is Molly) and she always hears the wrong things... very amusing.

There's a David Crowder song where he sings, "All this for a King" and I always hear "Elvis is the King". Calling Dr. Freud...

I'm going to think about humble hams instead.
12:02 PM