my favorite chef: a random wednesday 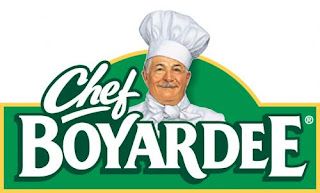 -yesterday the kids had a snow day.  shannon made them some kind of spaghetti-o's or something and while shoveling them down, jackson lovingly and sincerely stated that chef boyardee is his favorite chef.
-thanks to all of you for the traffic on my blog the last few months.  it's been amazing to see that so many of you are checking in and seeing what's going on.  now if i could just get you to comment and start some discussion, that'd be fantastic. 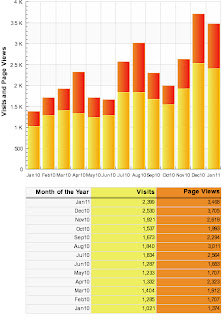 -i did a funeral yesterday.  there were about 70 or so people here at the church for the funeral.  there were about 5 or 6 folks sitting together that i took to be mennonites, or something of that ilk, wearing the kind of traditional dress associated with them.  i took particular notice of them, and noted that they were locked-in on me during the service, studying my every move.  i felt analyzed, but i know how i am when i attend another church, so turnabout is fair play.  whatever.  but then there's this:  as i was about 3 sentences away from the conclusion of my message, one of their cell phones rang - a high-pitched and violently loud ring.  he seemed to turn it off and show the appropriate embarassment, but then it rang again a few seconds later.

really?  if i had to guess who's cell phone would ring during the service, i wouldn't have guessed it to be the mennonite dude.  you never know.

-we had ice everywhere yesterday.  i had to wait until the afternoon to start to remove it from our driveway and sidewalks, and by then, someone had apparently glued it all down with industrial strength glue.  my snow shovel folded up like joe flacco at the prospect of facing that ice.  so i had to go around with a sledge hammer breaking up the ice before using the shovel to remove all that ice and throw it into the yard.  i guess it was over 90-minutes later that i finally collapsed in the warm living room.  seriously, whoever glued that ice down, i'm looking at you.

-actually, the location of my collapse wasn't the living room, it was the mancave, where i've been spending alot more time lately.  it's like my little steelers oasis in a world of ice and loud cell phones.

-speaking of the steelers (i tried to get all the way through this random post without mentioning the steelers, but i knew it would never happen), how great has this season been?  with ben suspended for the first four games, and with all the significant injuries they've sustained, i never thought that the steelers would be playing in the afc championship game in heinz field.  i'm predicting the steelers beat the jets sunday, but no matter what happens on sunday, i'm going to be thankful for a great season.

-we stopped at goodwill the other day and bought a 1,000 piece puzzle of the united states for 97 cents.  best 97 cents we ever spent.  we've been having a blast as a family sorting through the pieces and putting it together.

-i hope everyone's having a great wednesday, and that, if it's as gray outside where you are as it is where i am, i hope you find ways to discover the unseen color of life, lurking below everything, the Spirit and the essence of it all, the great scarlet coursing blood of life; the deep blue throbbing echo of deep calling to deep.  may you be reminded on this day that there is more to it all than what your eyes can see.
grace|peace,
greg.

Peggy said…
Love the Chef Boyardee story. Tell Shannon not to take it personally. I would tell you the same but I remember reading that you don't cook! Enjoy your puzzle. I hope it was unopened and that when you get to the end there's not some random missing piece ... like say, Heinz Field or something. The weather is terrible here as well. Citispot is moving across the street to the corner building that used to be the home design shop. I don't know why I mention that ... I guess I must be subconsciously thinking of a picking up a yummy vanilla latte later this afternoon ...as the freezing rain is once again falling. sigh.
11:37 AM

Crafty P said…
I comment, but don't always get a reply... eh-mmm (clearing throat sound).
I love that puzzle! are all the pieces there? hope so. I bought a puzzle at the kids consignment store and one of the pieces looked like it had been chewed by a dog. not happy.
Do you have a steeler puzzle? curious.

Crafty P said…
ps funny that Peggy and I thought the same thing about the missing piece.
12:36 PM

Happy said…
I tend to assume that leaving too many comments makes me look stalker-ific.

Love reading over here for the Steeler mania and I'm never let down.

And you have some classic one liners going on that make me chuckle out loud.

Guess you never can tell who's cell's gonna ring in church just by looking at them. Apparently, the Mennonite ones you gotta watch out for, though.

I can't believe someone glued your ice down. Rude.

greg milinovich said…
first of all, thanks for all the comments. you rock. i should start asking for things more often. ;) now for some responses...

@peggy: the puzzle was opened, but i usually am a pretty good judge of puzzle piece completeness by evaluating the condition of the box. doesn't always work, but it did this time! all 1,000 pieces were there. we finished last night. it was awesome. and your comment about citispot might have seemed random, but it was good to hear some clinton news! no one tells me much about what's going on there, and i miss it, so it's good to hear. thanks! hope you enjoyed a nice, tall, richly flavorful beverage from mark.

@craftyP: you got something in your throat? hibernation seems like a good option, other than the fact that i walk to work and am not very good at iceskating.

@happy: i don't think leaving comments is stalking...i think that is at least part of the whole purpose of blogging. how cool is it that i feel like i sort of know you - or at least have a friend in you - even though we've never met?! i think that's rad....yeah watch out for those mennonites. their phones are all kinds of loud.
7:23 AM

Emoly said…
I think just after your family, I'm the most "stalker" of your blog. I comment on Bill's all the time too. I can't help it. I guess I like adding my two cents.

I hope Shannon did not take that seriously. I think we tried some Chef Boyardee in college and were completely grossed out by it. So once Jack grows up and has taste buds, he'll appreciate momma's cookin'.

Please find the person who glued down the ice. They stopped here on their way to PA. I also chiseled away at it on Tuesday. I'm still sore. Now my driveway is an ice rink.
9:21 AM

Crafty P said…
so do you or do you not have Steelers puzzle!
5:05 PM