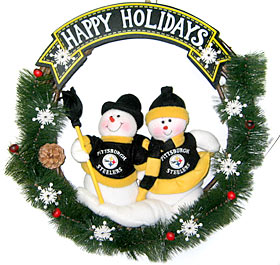 a few months ago, at the genesis of the 2010 football season, i wrote this little poem about the steelers, inspired by coach lebeau's annual recitation of the famous clement moore poem.  my friends over at behind the steel curtain - a top-notch steelers blog - asked me if i'd write a reprise now that it is actually Christmastime.  so i obliged.  click on the "keep reading" link to read my newest steelers verse.

‘Twas the night before Christmas, late in the season,


And the Steelers were feeling fine with good reason.

After eleven wins and only four losses

It looked like they would be the AFC North bosses.

With only one game to go - against the Browns -

They’d earn a week off if they beat those clowns.

Having already earned a “ticket to the dance,”

They knew in the playoffs they’d have a good chance.

But something was amiss across Steelers Nation,

They felt no joy, just aggravation.

“The offense is weak,” they moaned and they whined,

“They can barely score points of any kind.

“Arians is a fool; he causes us strife;

He can’t call a good play to save his own life.

Troy’s got a bum leg; the O-line gets run over.

Many fans had already put the season to bed.

Counting these things rather than sheep,

I lied in bed wishing for sleep.

When in through the window came a smell so strong,

I got up to take a look and see what was wrong.

When what to my nose should the soft wind bring,

But a series of perfectly formed cigar smoke rings.

I knew in a flash who it was, with relief,

The aroma assured me it must be the Chief.

Smoke rose through the night, slow as molasses,

And I could just make out the shape of black-rimmed glasses.

It was getting late, midnight it would soon be,

I heard the door creak, when I saw him at last,

An imposing figure, a man of such class.

He sat down as though he were not in a hurry,

And at once he addressed all my unspoken worry.

He said, “Son, I’m the father of this black and gold world,

And I’m proud of the trophies, rings, and banners unfurled.

“Take a look around this league, and what do you see?

Has any franchise known such victory?

“Does any other team know of such things?

Can any other club celebrate six golden rings?

“Listen to me now” was his directive,

“And let me give you a little perspective.

And he puffed his cigar as he gave his reasons

For the Steelers fans to have great hope this season,

“No one stops the run better, you know.”

“We’ve got Troy and Deebo; a ‘Doctor’ who spins;

With Ryan and Potsie and number 99.

He spoke of our rookies, of a fantastic draft,

Of how this new center cuts defenders in half.

He talked of Ben’s toughness, how he plays when he’s broken,

All the while his cigar he kept smokin’.

He brought up Mike Tomlin and his stunning wit,

And added, “that man is Steel-cut, made of pure grit.

“And I know that we bother the commish who is soft

But we are blue collar and will knock guys’ heads off.

But we’re not pretty boys like those cheaters called Pats.

“Don’t try to compare the Steelers to other teams,

That just makes you forget, so it seems,

And show the NFL why we’re still the best.

“Give thanks, Steelers Nation, for our tradition,

For perpetual winning in every condition,

“Be glad that we’re not like the Bengals or Jets,

Or the Vikings or Cowboys – wow what a mess!

“So pick up your towel and wave it with pride,

The great black and gold will continue this ride,

And then eight, nine, ten and eleven!

“Don’t get sucked in to the negative spinning,

Be thankful that your team just keeps on winning.”

Then, taking one final puff of his cigar,

He rose to his feet then shot off like a star.

But I heard him proclaim as he rose up toward heaven,