November 30, 2010
on this tuesday, the day after our church conference, i am breathing a sigh of relief.  now that all that paperwork and nominating work is done until next year, i feel like standing up straight and breathing again.

so, i thought i'd give you a light and fun post today.  even though it is ravens week, and all i can really do is lie awake at night with visions of rashard mendenhall running over ray lewis dancing in my head.  but i'll try and give you something besides steelers this week... 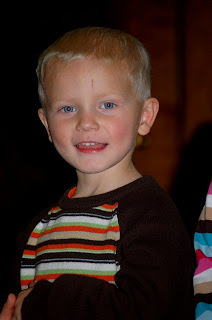 here is cade from his thanksgiving program at school (the one where they told us the kids were making us a thanksgiving lunch, only to find out that this meant little itty-bitty rolls of turkey lunchmeat on a toothpick with a one-inch square piece of cornbread and some popcorn.  i was thankful for my son's smiling face, and for the pizza in the fridge at home.  here he is with the turkey he made: 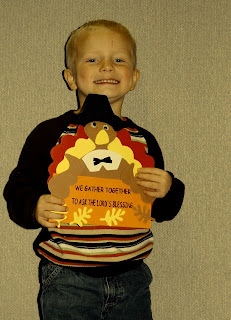 one day last week, in fact it may have been a week ago today, right around 4pm the sky turned into this amazing pink and orange and blue kaleidoscope of color that kept changing every few moments.  it was stunning.  i ran inside to grab my camera and i took a ton of pictures because i couldn't believe it.  none of them fully captured the awesomeness, but i share these with you and want you to know that i did not doctor them in ANY way. 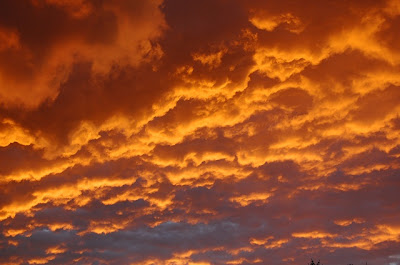 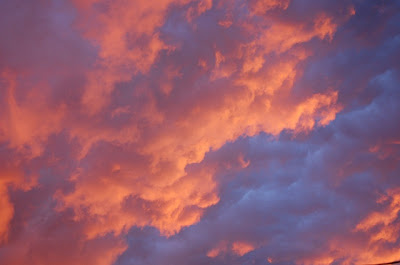 equally amazing, though perhaps a bit less majestic, is the following picture which i took one day when jack appeared in the dining room wearing a necktie and beads and sunglasses and a backwards hat making all these crazy moves.  when i asked him what he was dressed up as, he told me, "a dude."  so, without further ado, here is jack, the dude: 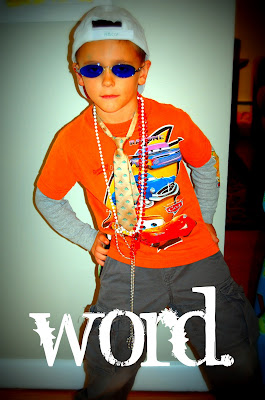 in other news, yesterday was the opening of deer season here in pennsylvania which not only means that all the children get two days off of school (since i presume most parents are trying to kill some deer), but that people of all walks of life get to carry a gun through the woods and shoot at things.  it is a rhythm of life that i'm not really familiar with but is very prominent here in this neck of the woods.  as i was driving up rt. 11 yesterday i was imagining the souls of countless deer rising through the gray sky, like some sort of deer rapture.  well, that, and i was remembering that parks and recreation show where she shoots him, but that's another story.  anyway, i just hope nobody gets hurt and people don't just kill animals because they like to kill things.
+++
we've started the decorating process here, which is an enormously more difficult task when you're in a new home.  you can use the "where did we put it last year" approach.  it's a completely blank canvas, which is cool, but a little overwhelming, too.  deck the halls!
+++
did i mention that it's ravens week?  have i also said here that i would really like to talk to roger goodell?  i need to understand how the two players who ripped each other's helmets off (after the whistle!) and started throwing wild punches at one another's heads, making a spectacle of themselves and really embarrassing the league (in my opinion) only got a $10,000 fine, while james harrison continues to get huge fines levied against him for borderline plays before the whistle blows!  look, i don't understand what goodell is thinking with some of this stuff, but maybe someone could convince me (i doubt it) that he's older and wiser and knows what he's doing.  okay, fine.  but at least be somewhat consistent!  this is really becoming a joke and it is sadly affecting my love for the nfl.  i still love my steelers, but i'm becoming less and less a fan of the nfl.  sadness.
+++
today is the last day of november.  holy tempus fugit, batman.
+++
also, it's christmas music time.  time to start pulling out the christmas cds and coming to terms once again with the fact that i do indeed own a mariah carey album, and that i (gasp) actually enjoy listening to it.  man, where are my convictions?  perhaps a post on favorite christmas music is in order....
+++
on a gross note, when we have leftovers here in the milinovich home, we usually make the kids shirley temples as a special treat.  they've gotten used to this tradition.  but cade hasn't quite caught on to the name, because last night as we were warming up the leftovers, he shouted, "i want a shoulder pimple!"  a shoulder pimple.  yummy.
+++
and on that note, don't forget to breath, and have a great tuesday.  it's ravens week, people.

Emoly said…
okay, I admit, when I read the title of the post, I wasn't sure where you were going with shoulder pimples... Now that I know, I wish I didn't. That doesn't sound appealing at all. However, make mine a "Don't call me Shirley" and we can salute something even better than shoulder pimples.
11:40 AM

greg milinovich said…
@emily: very clever. i see what you did there. but there's nothing better than shoulder pimples. sorry.

@joel: yeah, i saw that, but was too lazy to go back and change my post. it was originally reported at 10,000, but then 25,000 each. still, though, are you kidding me? jharrison got 75,000 for one "helmet to helmet" hit, which only occured because the ball carrier ducked into the hit. just ridiculous. not even worth trying to understand.
2:41 PM

cathyq said…
A Shirley Temple? What do you mean? also, "the dude" reminds me of someone else who likes to dress up (off hand I was thinking about a recent wedding) and dance around. Hmm.
8:05 PM

monica said…
that pic of jack is a blast from the past.

i too was thrown off by your blog post title, as I was eating chips and salsa at the time.
8:13 PM

greg milinovich said…
@mom - you don't know what a shirley temple is? it's a drink. sans the alcohol, of course. hence the name. it's cute and innocent.

@monica - how is that a blast from the past? are you saying he looks like me? or that his attire is similar to my regular high school wear? do tell... oh, and sorry about the title. didn't think about people eating while reading it. :)
9:40 PM

Megan said…
Love the shoulder pimple....well not so much...just love Cade saying it!
I'm right there with you on the fight and the fines. Pretty ridiculous and really made no sense at all. That fight was one of the worst I can remember seeing - I think the players should have been suspended for a game - since they're all about protecting the image of the game!
9:49 AM