November 08, 2010
it's a monday.  they sometimes play football on mondays, right?   a quick check of the schedule tells me that the steelers play tonight.  tonight!  the steelers!  are you ready for some football?!?

so, in honor of the greatness of the day, i thought i would share this picture with you.  a picture of something i just received in the mail on saturday.  no, not the car.  but my new license plate! 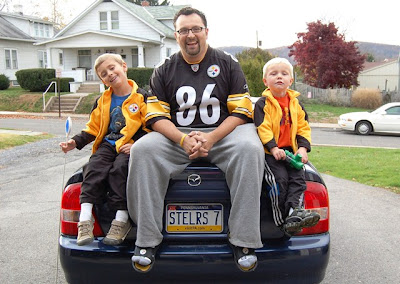 you may think that the #7 is in honor of ben roethlisberger, and that would be fine, even though that isn't why i got it.  at least not completely.  i mostly chose number 7 because the steelers are on a quest for championship #7, and i hope it comes soon.  i will wear that hope on the back of my car so that everytime i pass a browns, ravens, cowboys, bengals or eagles fan, i will remind them of the greatness of the greatest franchise in the history of greatness.  they will be humbled by my dazzling license plate, or else wonder why i can't spell "steelers" (they only allow 7 characters and "steelers" was taken, fyi).  either way, i will be content.

oh, and i will purposely leave my headlights on when i go to special events like school concerts where they will have to announce over the loudspeaker, "if you drive a blue sedan with the license plate STELRS7, you left your lights on."  and i would overtly stand up, pretending to be embarassed and say, "oh, how foolish of me, HERE WE GO STEELERS, HERE WE GO!!!!!!!!!!"

cathyq said…
Oh yes, and you will just happen to be wearing something black and gold no doubt!
7:11 PM