harry potter and the deathly hallows 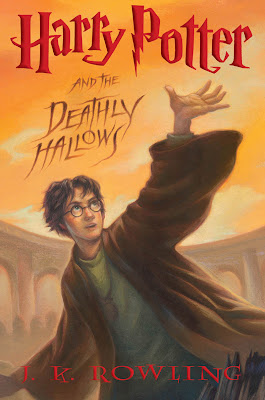 i have been waiting to write this post for about a week, but i figured i'd wait until the release of the movie, since there will be a great deal of cultural buzz this weekend.  i'm sure #harrypotter will be a trending topic on twitter, and we'll be seeing news coverage this morning of people lined up in front of theaters last night to see the newest film installment of the harry potter series at midnight.

there's certainly no avoiding it: harry potter is now an unmovable part of the cultural lexicon.  whether you love or despise the stories, they're not going anywhere.

i, for one, love them.  i always have.  i started reading them with some curiosity, seeing as how some of my own church people at the time were slandering the story, saying that it was "of the devil" and "a force of evil."  so of course i went out and bought one as quickly as i could.  i remember my first time through that paperback copy of "harry potter and the sorcerer's stone," amazed at how much it felt like i was reading the Bible. i was amazed at how much i could see Christ in the pages.  i couldn't understand what people were so upset about.  sure the little guy used a wand, but it was just a story!  the real spirit of the story wasn't about magic, but about love and sacrifice and friendship and community and the kind of virtues you read about in a william bennett book.  it told the story of love and hope in a way that i desperately wanted to, and in a way that the Christian fiction of lindsay and peretti and lahaye have never done.  it wasn't a story that talked about love, but a story that actually showed it in a compelling and moving way.  it was, at least for me, remarkable.  and it also showed me how Christians can so easily miss seeing Jesus all around us, probably because our eyes are full of giant blind spots (Jesus called them logs).

all these years and 6 books later and i am still amazed.

***HUGE SPOILER ALERT HERE.  DO NOT CLICK TO READ MORE UNLESS YOU WANT TO KNOW WHAT HAPPENS IN THE LAST HARRY POTTER BOOK!  YOU'VE BEEN WARNED!***

i just finished the final book last week, and i was stunned.  i literally wept.  not because it was some phenomenal piece of literature.  not because it was so sad (though that was part of it), but because it told a story full of death and fear and hate and injustice (in other words, a story just like real life), while managing to hold up the idea that truth and hope and life and love are stronger than all of that in the end.

seriously, think for a minute.  where else to you find a story like this today?  most of what passes as Christian fiction is either watered-down romance novels featuring a good looking pastor's family, or end-times theologically gobbely-gook meant to scare people into a particular worldview.  the rest of it is the stuff of readers digest.  there is very little mainstream fiction that bears the label "christian" that actually speaks to my experience of the world.

and then there's harry potter.

no, i don't know any wizards or sorcerers.  and that's not the point.  do you hear that, fundamentalism?  it's not the point.  harry isn't a wizard, he's a young man, discovering that he's been marked by sacrificial love, and learning to stand up to the hate and fear and injustice that he finds in his world.  and he finds that he doesn't have to do it alone, but he has others who will go with him, who will use their gifts, and together they will be a community (a body).  i read about the same thing once in a letter written by the apostle paul.

anyway, i wrote this post to say something pretty simple: i think the harry potter stories are amazing.  in the end, after doing a very good job of demonstrating the world can be a very dark place, they stand up and shout the belief that the light is stronger than the darkness.  they resonate with a resounding hope that love is stronger than death, and that, in the end, death will be defeated.  i know that story!  i read it in my Bible.  and now i have an avenue to share that with others who may not have read the Bible before, but who have read harry potter.

the harry potter series is as insufficient theologically as most of the stories in the old testament (less so, actually), or the parables of Jesus.  it isn't meant to be a systematic theology.  it is just meant to be a story.  but in the process, it has become a story that tells the truth in a way that many stories fail to do.  you can disagree with me about the values or pitfalls of reading harry potter, but my experience is that reading harry potter has brought me into a deeper and stronger relationship with Jesus Christ, who i believe is the one whose sacrifice has marked us and called us to love with all our selves, regardless of the risk.

I agree with you, Greg. To me the "news" about the evils lurking in any book is a result of fear and ignorance. Are we teaching children to read and expand their imagination or to close themselves off to the world?

Despite what is said in the news, I can only hope that in the end love wins.
11:26 AM

Unknown said…
I have some pretty solid literary theory that speaks to the similarities between the story of Christ and the Harry Potter series, as well as the similarities in reader reactions to both. Inbox me, if you're interested.
4:15 PM

cathyq said…
I too love the Harry Potter series. It reminds me of The Lord of the Rings and The Chronicles of Narnia. Great story, good lessons, so fun I don't want it to end. Love the movies too.
7:49 PM