November 10, 2010
the steelers played monday night, and i would have written about it yesterday, but i was just too exhausted from staying up so late not only watching the game, but not being able to sleep afterwards because i was so amped up.

and by amped i don't mean "oh man i'm so wired because that was such an awesome victory and now i just want to bask in steelers glory for the next 92 minutes."

instead, by amped i mean "holy crap i can't believe we almost let that game get away and i swear every game this team tries to give me a combination of an ulcer/heart attack/acid reflux and i am literally not going to live as long as i should because this team can't hold onto a lead in the 4th quarter."

if you want to watch the highlights, click here.

or, if you'd rather not, here's what happened:
the steelers capitalized on stupid bengals mistakes to take an early lead.
the steelers maintain and build on said lead by outplaying the bengals for most of the game.
the steelers realize that they've reached the 4th quarter and proceed to take a nap until the game is nearly lost.

along the way, rashard mendenhall had a great performance, constantly dealing with bengal defenders in the backfield, and often finding a way to turn it into positive yards. 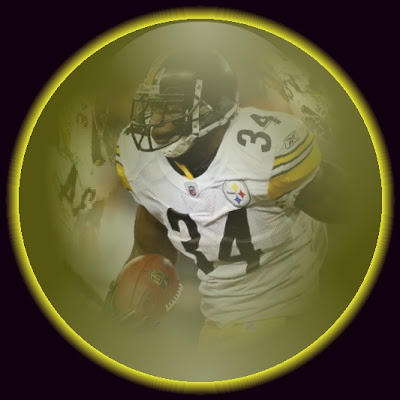 also, i have to give kudos to steelers wide receiver mike wallace, who keeps adding to his yards per catch numbers with his speed and his willingness both to adjust and take a hit.  for that, mike wallace has earned my "sometimes you just want it more" picture of the game.  nice work, anchorman. 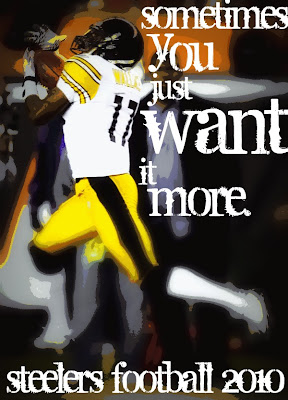 also have to give shout outs to:
-the steelers defense...for bending but not breaking
-hines ward....for keeping the streak alive and making up for your fumble
-the o-line...for overcoming some serious injuries
so, at the halfway point of the season, the steelers are 6-2, having played half of those games without the franchise quarterback.  i think we're in a good place.  next come the new england cheatriots - who just got embarrassed by the brownies - so it doesn't get any easier.  but at least now we have the talisman that will surely be the steelers charm on their quest for 7: 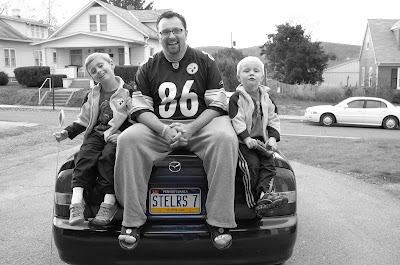