about a month ago i found a door lying next to the street.  someone had put it there with a "free" sign on it.  so i stopped the van, with the whole family wondering what i was doing, and took the door.  this of course led to conversation about my borderline hoarding and so on, but i defended myself by saying that these kind of found objects are my muse in making art.  i am infinitely inspired by objects being out of place, and by the jarring possibilities of juxtaposed relationships.  i just can't help it.  even as i was trying to fit the door in between the two car seats, my mind was already racing towards ways i could use it to express this longing inside me.  a longing to mix and combine and to say something about it all.

then, last week, i had a similar moment, although this time i was by myself so i didn't have to defend myself.  i found an old tv.  and so i took it.  i figured it didn't work, so i was thinking about how i might be able to take out the insides and do something with the frame, but as soon as i got home i plugged it in just to see, and it worked!  and as i stared into the blinking static, i had the idea to use that very static as part of an assemblage.  here's what i did:

i painted the screen black.  in fact, i put about 4 or 5 coats of paint on that screen to make sure it was completely covered and wasn't letting any light through.  when i turned it on after that, you couldn't see anything.  then, inspired by the image i sometimes have of us as zombie-like consumers of tv-ized entertainment, i used the image of a woman's head from a 1960's mccall's magazine ad, and opened it up, as if we had access to her brain.  then, using a picture of a can of pure shortening, i affixed all of this to the screen to seem as if the shortening was pouring into her brain.  then i used a metal object to remove the black paint where the shortening would be pouring.  so that when you turn on the tv, it appears as though static is pouring into her brain.  i also cut holes in her eyes, so that, depending on how you look at it, her eyes are either sparkling, or are oozing with shortening.  you decide.  i finished by decorating the television with mostly 1940's-1960's era advertising.  the end result is an assemblage that a photo just won't do justice to.  below are some pictures, but you can watch the video above for a better view.

i hesitate to share this with you all, for fear that you will all realize just how borderline insane i am.  however, i had to prove to my family that i'm not just a hoarder - that i actually have a purpose for the "junk" i find.  i still have to figure out what to do with that door, though....

these are what i did to the sides of the tv 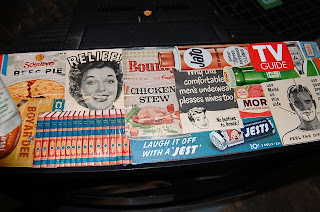 here's the top of it 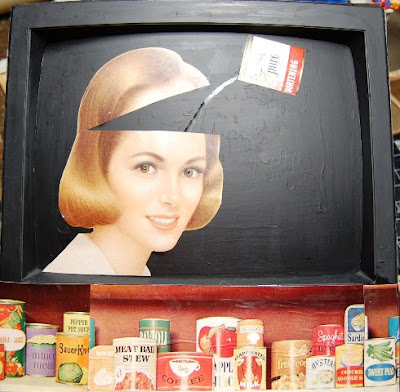 the front view (tv is turned off) 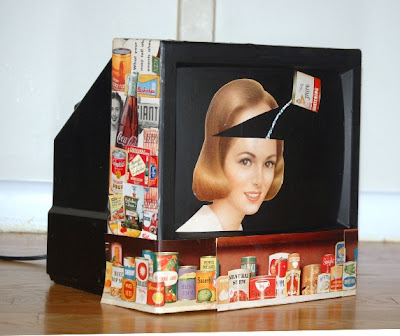 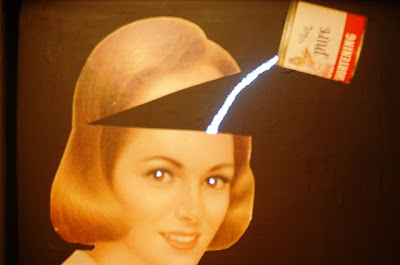 screen shot (with tv powered on)

greg milinovich said…
i'm finding it wonderfully ironic that an ad pops up during the youtube video. it's perfect, really.
9:23 AM

RedBank Billy said…
I have to say, of all the "stuff" you have done, this is outstanding...
seriously...outstanding....
5:10 PM

greg milinovich said…
thanks, Billy. that's nice of you to say. glad you liked it.
7:47 AM

Kim said…
very creative Greg! I hope you are able to use some of your interpretive art in your Worship services! So neat - thank you for sharing!
11:10 AM