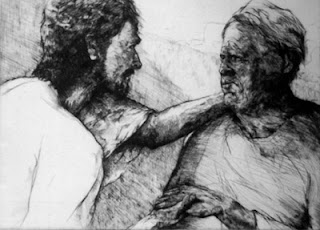 this coming sunday i'll be preaching about the story told in the gospels (luke 17) where Jesus encounters a group of 10 lepers and tells them to go show themselves to the priest.  on their way (they must have been confused about such a strange order from this rabbi) they are made clean.

did you catch that?  that's a big deal.  10 people who were considered wildly unclean; who were not permitted into the center of society; who were forced to live life on the margins; who were excluded not only from fun and casual situations, but also from living the life of faith, were made clean.  just like that.  this is a huge moment.  everything has just changed for them.  they've been healed and in an instant find themselves off the margins and back into the mainstream.  this is monumental.

so what do they do?

well, they go on with their lives.  they've been made clean.  so they go on living normal lives, as best as they could fashion.

wait a second here, wasn't he already well?  didn't luke already tell us that he had leprosy and then he didn't, so he was good to go, right?  what kind of added bonus did he get by coming back to Jesus?  well, the word that gets translated into english as "made you well" is possibly better translated as "made you whole."  in other words, our lonely leper had already been clean - they all had - but he was not being made whole.  the difference could be important for us.

many christians, it seems to me, are content with normal.  they've had an encounter with God through the incredible love and mercy of Jesus Christ, but they live as if the great power of this encounter is that they can now blend in and be as normal as possible.  but this story seems (at least to me) to challenge that notion.  that we aren't just saved, or changed, or "made clean" so that we can return to normal lives.  if we really recognize the incredible magnitude of our salvation, we can't help but throw ourselves at the feet of the mercy that saves us, to say thank you thank you thank you.  and when we do, we find ourselves "made whole."  in other words, we find that we are more our true selves than we have ever been before.  life isn't about being normal.  it's about being whole, which is way more than normal, way more than fine, way more than just ok.

ten people were saved from the margins.  9 of them returned to the happy center.  one of them, i have a feeling, went back to the margins to tell others.  are you the one or the nine?