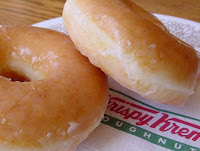 this morning i woke up early here at my hotel and thought i'd take a walk in morning darkness.  i rambled through the pre-dawn in a kind of coffee-less stupor until my sixth sense led me to a krispy kreme donut shop, an establishment i haven't been to in several years.  like a moth to a caloric flame, i soon found myself inside ordering some donuts.

i got a large coffee and a couple of donuts: one classic glazed and one chocolate donut.  imagine my surprise when i got to my seat, opened up my box and found that i had been given three donuts: my chocolate one and two classic glazed ones.

now, this could have been a happy mistake, but i have a feeling it wasn't.  i think it was just good business.  i mean, how much does one little ball of dough really cost krispy kreme to make?  probably not much.  probably a cost they'd be willing to pay to earn my consumer loyalty.  in other words, they were willing to give me an extra donut if it meant that i would come back again and buy more donuts.  that's what they're counting on, and it's good business.

which got me thinking, why don't we do this in the church?  why don't we give people more than they bargained for?  if we really want our churches to grow (which is what we say until we are red-faced and angry at the world), why don't we give visitors "an extra donut?"  maybe it's a little less straightforward at church since people don't come up and expressly communicate their expectations ("i'll take one really good sermon and a good sunday school class for my kid, please"), but i still think we can be intentional about providing something more than what they would expect (and let's be honest, at this point, aren't most people expecting something south of mediocrity at most mainline churches these days?).  that's the kind of church i want to lead: a church that gives an extra donut because we believe in what we have to offer.  by the way, that would be the love of Jesus, which is so much better than a donut.

What if some day the offering plate was passed and people put in cash if they had extra to give and took out cash if they needed it. Crazy?

greg milinovich said…
it IS a wild thought! i've just been visiting a church that donates their entire christmas eve offering! for many churches, that's one of their biggest offerings, or they hope it is. this church made a commitment to give it away to important causes, and they nearly doubled the offering! the pastor's quote was, "you simply cannot die when you're giving yourself away." interesting stuff.
9:51 AM

Emoly said…
I'm missing your actual point and am more focused on the donut... You know they give you a free one when the "Hot Sign" is on. You don't have to buy anything. Walk in when the sign is lit and get a free donut. How's that for good business???
11:21 AM