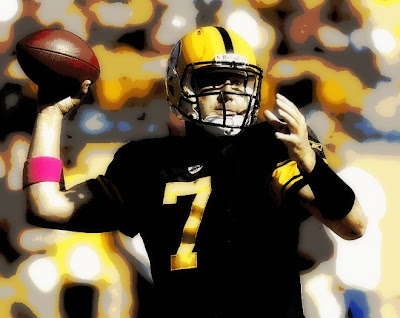 i have some mixed emotions about this, as i understand why people are a little hesitant to cheer for someone who seems to have tested the limits of the law when it comes to consent and control.  as has been said many times before, no charges were pressed against roethlisberger in the georgia case, but most accounts suggest that at the very least his behaviour was sketchy and immature, if not downright illegal and immoral.  so, i get the hesitation to cheer for him.
on the other hand, everything that i was hoping would happen following these allegations has happened.  i was hoping ben would be suspended.  he was (four games).  i was hoping that this might help him get his life back on track (i can't know for certain if this true, but all accounts from him, his mentors, and the media indicate that he seems to be a changed human being), and this looks to have happened too.  he has recently satisfied the media's crushing curiosity with a slew of interviews in which he suggests that the allegations against him were false, but that he takes responsibility for putting himself in some pretty awful situations, and for falling away from his foundation and upbringing.  he has talked about getting right with God, and about reconnecting with his family in accountable ways.  will it last?  i have no idea.  but i am hopeful that this was the "rock bottom" that ben needed to get his off-the-field life on track.  because he is, first and foremost, a human being, not a football player. 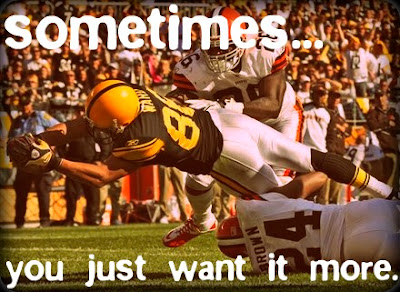 so, all of that being said, i was happy to have a reformed ben roethlisberger back at the helm for the steelers yesterday against the browns.  i'll save you the long game recap here, as you can find that on about 6,000 other steelers blogs on the interwebs.  suffice to say: it was good to have ben back.  the browns aren't as bad as they seem, and are dealing with a ton of injuries.  the steelers beat them pretty soundly, and now are in first place atop the division with the ravens losing to the cheatriots.  all is well.
oh, one more thing, as for james harrison's supposed dirty hits, i would like someone to show me how those hits are illegal.  are they violent?  yes.  but illegal?  i just don't see it.  i've watched each one at least a dozen times and tried to imagine how he's supposed to make those tackles.  these guys get such mixed messages from us: we love the physicality and violence of the game and reward it with highlights and adulation, then, if someone gets hurt, we say they are a thug.  which is it?  we can't have it both ways.  i HATE seeing guys get hurt, as i think about their futures and their families, but i also enjoy the physicality of the game.  it is a fine line that the NFL seems to be having a more and more difficult time walking.  browns fans are upset, but until it changes to a flag-football league we can't complain.  it is the way the game is played.  james harrison did nothing illegal.  he didn't taunt.  he didn't showboat.  he made sure tackles against ball carriers who can easily make open field moves or escape arm tackles.  he should not be penalized, fined, chastised, told to scale it back, or labeled as a thug.  should the game change?  perhaps.  but harrison is only playing the game by the rules he's been given. 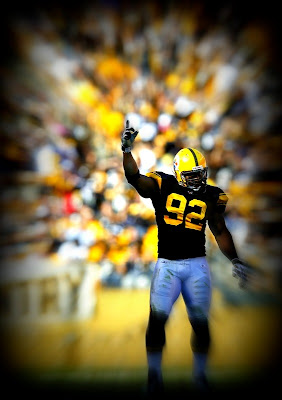 poker affiliate said…
The Harrison hits were legal according to NFL rules, but he received a huge fine to give the appearance that the NFL is serious about protecting players. On the NFL.com website they were selling pictures of the hits by Harrison, so it seems a little hypocritical.
3:13 PM