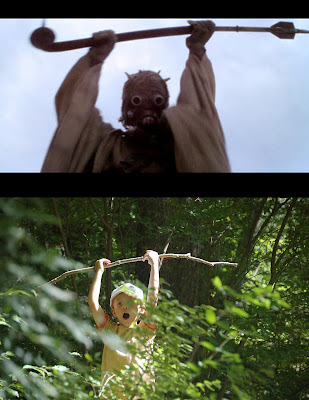 in today's installment of randomness, i begin with a demonstration that my oldest child is secretly being influenced by a rogue gang of tusken raiders from star wars.  a few weeks we took a hike near penn's creek with a friend when jack struck this pose, and i knew immediately that something was up.  but when he started shouting in ways that sounded like a wildebeast with a mouthful of peanut butter, there was no question about it.  if he starts asking if he can spend the night with a friend on tatooine, i'll know i've got a major problem.

-what have i been listening to?  how about Justin Townes Earle's awesome alt-country album with a new york city theme?  it's called 'harlem river blues,' and you can get it here for $3.  i'm lovin' it right now.

-i watched a nature show the other night about piranha.  apparently their teeth are really really sharp.  also, the people who live near the rivers in south america like to catch the little buggers and eat them.  and when they've finished picking piranha meat off the bones, they like to clean off the jaws, separate the top jaw from the bottom jaw, and  - are you ready for this - use them as scissors for cutting hair.  that is correct.  they just hold the jaws in two hands right next to someone's head and just click them together, as if their is a really angry bony piranha just inches from your skull, chomping on your locks.  the world is a weird place, man, and probably full of aliens, as evidenced in the picture above.

-we've had issues with cade learnng to talk, and while he is doing better, he still has some trouble.  and by that i mean, we still have some trouble figuring out what he is saying sometimes.  well, apparently we've really been working on the "t" sounds because when we don't understand him recently, he gets singularly frustrated with us, and believes that he only needs to precede whatever he's trying to say with a series of dramatic "t's."   so, with intense over-annunciation he says, "t-t-t-t-t-corn chowder!"

-some pastors are really good.  and, others?  well, not so good.

-back to wildebeasts for a second.  do you think noah would seriously let wildebeasts on the ark?  i can't really imagine a scenario in which that happens.  in my mind's eye, i see the pair of enormous oafs ambling towards the front door of the gopher wood boat, and noah checking the guest list, saying, "sorry guys, i don't have you down here.  i can't see anything here about giant hideous looking groaning animals.  sorry, hope you can swim."  apparently, they can swim.

-i am currently leading a study in my church about what it means to be a united methodist. last week we talked about the history of our denomination, and i had 20 people there!  this week we are discussing the polity and organization of the church.  any methodist readers out there have any ideas about how to make this interesting?

-hope everyone's having a good week.  if you didn't read it, i'd love for you to read what i wrote about prayer yesterday, and offer me your two cents (or five, or twenty-five.  or heck, give me a couple bucks.).  be well.

Emoly said…
I am also interested to hear how one can make the polity of the church "interesting"???
8:41 AM

Bill Uebbing said…
I also watched the special on Piranhas. Fascinating. And, just for clarification are you saying the minister who killed his wife was bad because of the stupid way he tried to do it? Or just bad because he did it. Twice, apparently. Never mind, I think I answered my own question.
9:00 AM

RedBank Billy said…
I have a great way to make it interesting.......don't do it!!
HEHEHEHEHEHE (sorry I couldn't help myself)
10:46 AM

Crafty P said…
This summer I became rather interested in River Monsters- ever watch that? And Survivor Man. My kids love that show.

In order to make anything interesting, tell jokes often and serve food. That should get you all through polity and organization.

monica said…
i had to teach 5th grade grammar (which is about as spellbinding as UM polity, i would imagine) i found that multicolored dry erase markers made all that underlining and circling subjects, predicates, etc more exciting. well, maybe not exciting, but a little better than blah blah blah.
about your post on prayer yesterday. i had two thoughts. one, i am totally one of those people that pray for a good parking spot, not because i am needing exercise, but because i usually have 2 little boys in tow and maybe a bunch of bags and i just dont want to have to worry as i cross multiple lanes of traffic. and if that were the extent of my prayer life, i would think that is not healthy, but i think God doesnt mind if we pray about the "small stuff". He cares that our children dont run into harms way. He cares that our day has been stressful and a parking spot would help out. He doesnt always give us one, but its still OK to talk to him about it.
also, i think there is such a thing and "wrong prayers". The publican and the pharisee story shows us this. We can pray for selfish, even evil motives. In this way the ancient prayers from the bible and the early church are so helpful. They show us prayers that open ourselves to Gods presence. They are anointed prayers. Non-spontaneous prayers, or liturgical prayers, are such rich spiritual food. hope that helps.
6:01 PM

i appreciate the feedback on the prayer thing, but i am not convinced on the parking space thing. i don't have a problem with praying for "small things" (where have i heard that phrase before?), but i am generally really turned off by these prayers because i often find them to be ridiculously selfish, which you pointed out is a symptom of a kind of sinful praying. i think when we pray for convenience we are actually praying to a God of convenience (a false god) and not YHWH. i don't see this God of convenience in the scriptures, and i certainly don't see this God personified in Jesus. at least in my mind that's a different thing than saying that God isn't interested in the minutia of our lives - because i certainly believe God IS interested in all of that. that is part of having an intimate relationship with God.

ps. i LOVE having these kinds of dialogues...thanks for engaging me!
9:03 PM