yes, it is monday morning, so it's STEELER TIME again.  welcome to the no-spin zone of black and gold football.  i report; you decide.  hahaha (ironically, that slogan is just as ridiculously untrue here as it is in other places).

the above video is a perfect metaphor for my monday morning.  i'm the cat, and the steelers' unimaginable defense is the catnip that i am rolling in and trying to wipe all over my face.  like a desperate junkie, i just can't stop.  the game the steelers defense played yesterday was more than just impressive: it was dominant, terrifying, spine-tingling, and awe-inspiring.  simply: wow.

earlier in the weekend i had posted this picture of troy polamalu with a prescient caption: "sometimes you just want it more."  and it seems to me that accurately sums up the game yesterday against the titans.  we clearly just wanted it more.  i mean, we were inept on offense.  really REALLY bad.  beyond bad.  we scored no offensive touchdowns.  our leading receiver caught two passes for twenty-five yards.  our offensive line was so banged up that i think the punter was next on the depth chart at left tackle.  it was, to be honest, a terrible, horrible, very bad, no good day.

but that didn't matter.  because - and i think this is important - the defense just wanted it more.  if you follow the steelers at all then you know that the main story (sometimes it has seemed like the only story) to be told so far this year is about ben roethlisberger's absence and who will get the job done: dixon, leftwich, or even batch.  but it seems that all the talking heads forgot to include someone else on that list who could get the job done: the defense.  and they seem to be playing like a unit who feels underrated and disrespected.  i haven't heard them say much about it, but their play is just screaming, "who cares who's playing quarterback?!?  we got this!"

and i love it.

7 turnovers.  brutal hits.  confusing coverages.  only 34 rushing yards allowed to the "great" chris johnson.  sacks, forced fumbles and just alot of old-fashioned butt-whoopin.  there's only one thing to say about this: 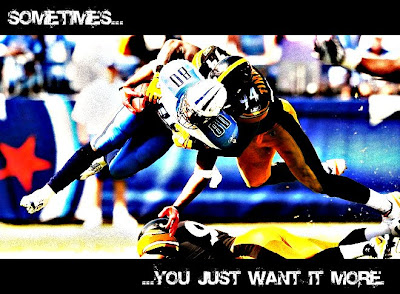 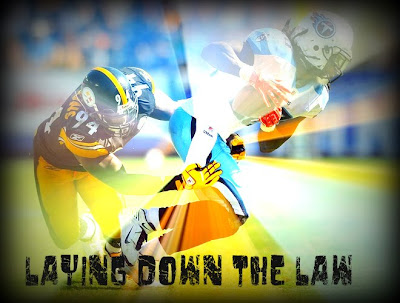 and now i need to get back to spreading defensive awesomeness all over my face.  see ya!